In v 4.3.4 after component missing dialog, AP Core Feature and Network libraries were installed. KNIME has restarted and FW with graph nodes appeared without some connections between green ports. Also, green port on used component was replaces by regular one. Do not remember this happened before.

I’m having a hard time understanding the specifics of the problem. I gather that you had an existing workflow already that featured some network nodes, and when you try to load in a 4.3.4 some of the connections are broken?

But there’s also some things that you mention about components that aren’t clear to me. Can you maybe provide some screenshots or additional context?

Sorry for giving you a hard time. 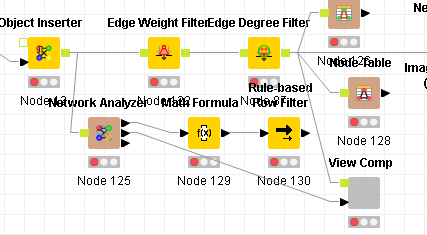 Gray component green port became a regular one in black.

So the input port of the component changed, while the nodes inside remained the same?

Did this happen after a KNIME upgrade from a previous version, or after you installed new extensions? I’m still not quite understanding the problem, and having a hard time envisioning how something like this would happen.

Is it possible to reproduce this?

And after the error happened, were you at least able to reconfigure the component, reconnect the nodes, and get things working again (I hope)?

I migrated from 4.3.4.installation to the new one 4.3.4. using a copy of the work space. Opening WF with graph nodes I’ve got dialog to add graph nodes. After installation green ports were not connected. To have a working WF I exported one from the old installation and import it on new installation. In component green port was replaced by regular one. Inside component was no connection to the first node. Component content was the same.

Okay, so it sounds like for whatever reason the component ports changed but nothing else did. That’s certainly annoying, but glad you were able to get it back working again.

This is the first I’ve heard of an issue like this, so I’ll ask around about it internally. In the meantime, we’ll see if anyone else reports something similar - hopefully this is a one off case.

Thanks for the feedback!

The big surprise that connections between green ports were lost. Edge Degree Filter appeared without connections.