Knime 4.4.1 on Windows 10.
I just wanted to add a column name to append within a loop to a string manipulation node. There is only a bool field but not a string field in the flow variable tab. For “replace column” it’s exacatly the other way around: You can only set name (string) but not check the radio button (bool).
Is there really something missing or are the fields double used and poorly labeled? 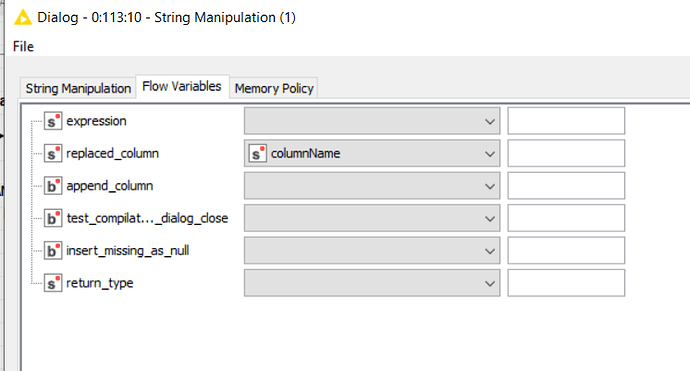 Hi @Jrole , looks to be a bug/inconsistency to me. Not sure if that was introduced in v4.4.1 or if it was always like this. Thank you for bringing this up.

remember stumbling across this some time ago. So replaced_column field should actually be called “append_or_replace_column_name”. That means if you choose to replace column it will replace column with that name or if you choose to append it will create new column with that name. Same behavior is in Math Formula node. Rule Engine seems to have this separated. So would say fields are double used and not so good labeled.

Hey @ipazin , thank you for the information. It’s what I would expect if I were to take a guess, but I did not want to make that assumption (though I could have tested it

), because there seems to be inconsistencies about this kind of stuff through Knime, where some nodes have it separated, like Rule Engine as you mentioned. If I recall, I have also seen behaviours where I expected a field to be “shared” (like append_or_replace_column_name), and it made sense that it was shared, but then finding out that they’re separate fields.

But at least we know in this case, it’s a field used for column name for either append or replace.