Calculate the median of a row without transposing first?

I have a table with 69 columns and 58,000 rows. I would like to calculate the median of each row but I can’t find a way to do this without first using transpose to get my columns into rows that I can use GroupBy to calculate medians of. Is there any other option - preferably one that won’t require me to transpose first (only to then re-transpose after)?

You could use the median() function in the Math Formula node. Does that work for your case?

I’m not clear on the syntax for the median() function in Math Formula; how do it set it to calculate the median of a row?

In my case, all the columns who I want to be figured into the calculation for median have “intensity” in their name. I tried
median(“intensity”)
and it returned a syntax error. (i had asterisks on either side of intensity, inboard of the quotation)

You’ll have to enter the name of each column explicitly, as I don’t believe wildcards are supported. Here’s an example for calculating the median of four columns: 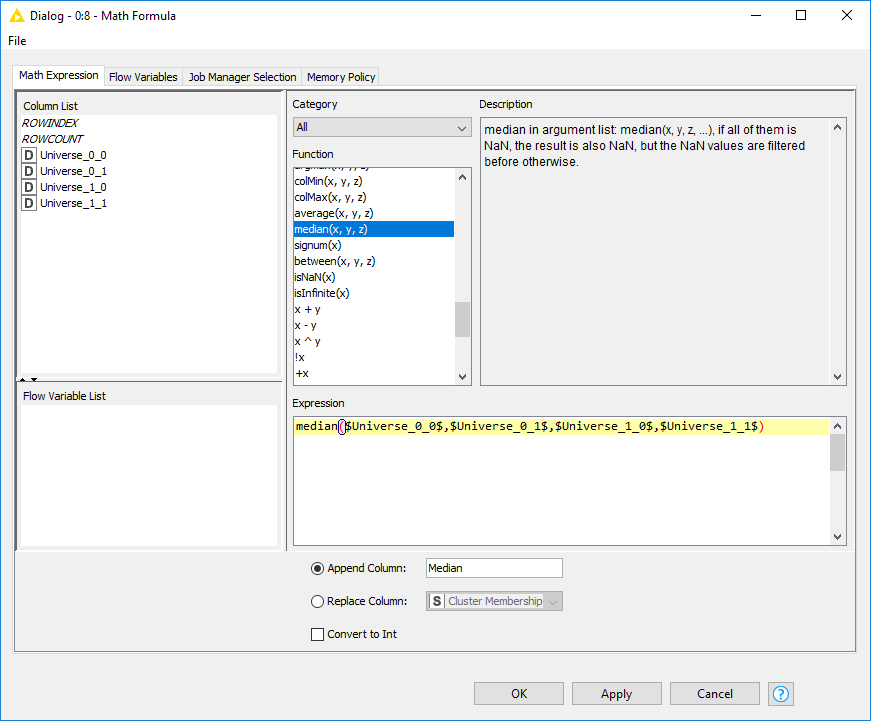 It will be quite a large expression in your case, but should work. It might be easier to cobble it together in a text editor like Notepad++ and paste it in.

Is there any way that I could set this up for a future case where I won’t necessarily know the number of columns beforehand? I tried to get it into a flow variable list, but that doesn’t seem to work as it still wants (at least) three comma-separated values even if one is a list of values. I tried then following the list with “NaN” (twice) and that ran but returned all invalid medians.

Thank you for your help! I eventually realized this was easier (for me) to do with an R snippet.

I think Column Aggregator could be useful as well.