Call Local workflow returns "workflow not executed", although it was...

Hello,
I have tried using the call local workflow node but although it is executing without errors and the target workflow is executed, the collected column is always filled with :
Failure, workflow was not executed.
ROOT : EXECUTING (start)
ROOT (end)
I also tried to call the example workflow provided on the example server “_Predictor_Flow” from my workflow and there it worked so I guess the problem comes from my own “remote” workflow.

I have attached the 2 workflows as well as the input images that are used in the “remote” workflow. Basically the first workflow FolderWatcherSI is designed to run the workflow every time a new file/image is appearing, and this workflow calls the remote workflow to process the images. However for test purposes the call local workflow is set to use the default JSON input.
Consequently, in the remote workflow “matchTemplate” the JSON input should be set to the path of the larger image, while the image reader node of the top should be set to open the smaller image attached.
Additionally you will need the python extension for image processing to run the workflow.
Thanks !

Any suggestion would still be appreciated…
As a workaround I will try to use the external tool node to run the local workflow from the command line.

Sorry for the late reply.
I had some problems running your workflows but I think it could be related to the unconnected nodes in the MatchTemplate-SmartImaging. Could you remove them and try it again?

Alleluia !
I removed the unconnected nodes in the “remote workflow” and I still had the issue, however by curiosity I also removed the 2 image viewer nodes after the python node (parallel to the JSON output) and I have no clue why but it worked !!

I initially though I could use the same workflow as a main workflow or as a remotly called one, anyway I am happy with that still. Let me know if you find the bug.

I also removed the 2 image viewer nodes after the python node (parallel to the JSON output) and I have no clue why but it worked !

Without knowing the details of how external workflow execution is implemented, I’d suppose that it could work if you drag a workflow variable connection from the Image Viewer node to the Columns to JSON node, to ensure that the Image Viewer is executed before the JSON Output is running… 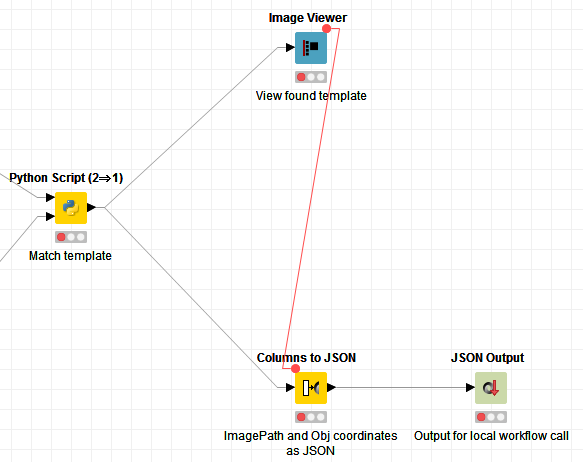