I used Knime for the first time a few weeks ago and had a project open and (I thought) saved on my local computer; a folder for the project is there but it appears to be empty, or not accessible. An unexpected forced restart from Microsoft (presumably update) wiped out the open project. I can recreate it, but I don’t understand how there can be a local folder if in fact the project was not saved. Can someone enlighten? Or, how can it be opened? Is it possible I did everything on the hub, without realizing? If so, my email address was not recognized even though I did get several emails after I initially downloaded it. Any thoughts? Thank you!

Hi @farrarjonc1 , and welcome to the Knime community!

I’m sorry to hear that you appear to have lost your workflow. As a relative newcomer myself, I probably can’t answer all your questions but I can give some ideas on a few of them.

Firstly when you create a new workflow, that action itself will create a local folder with the initialised workflow, so if you then built a workflow but didn’t save it, you would most likely see an empty project folder if Knime had then been force-closed by something like a Windows update or a system crash.

Unfortunately I don’t think that there is likely to be any way to recover what you had if it wasn’t saved.

To mitigate from this occurring in future, obviously the first thing would be to save your work regularly (periodically pressing Ctrl-S) and especially before leaving the computer overnight), but I’m only-human and guilty of this too… I nearly lost some work a couple of nights ago for exactly the same reason you describe - a Windows update that didn’t take any prisoners and simply closed Knime. The reason I didn’t lose my work was thanks to an auto-save setting in Knime that I would recommend you switch on. If you have very large data sets which would be recoverable by rerunning (albeit with some time penalty) I’d probably suggest you have “Save with data” switched off, as this will presumably consume more resources and incur a performance penalty). Others will correct me here if I’m wrong in this regard.

If you go to File-Preferences-KNIME-KNIME GUI you will see the following dialog, where you can turn Auto Save on. It auto-saves periodically to an alternative folder which it will recover from in the event of a sudden shutdown such as this. 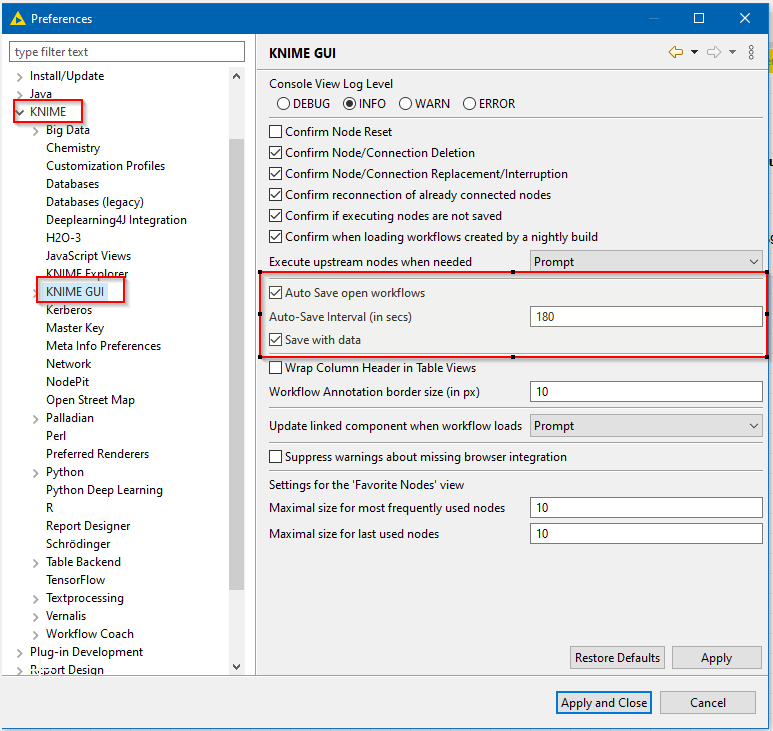 I don’t think it’s likely you were somehow saving everything on the hub. I’m not even sure that’s possible, and certainly not something it would be doing by default. When creating a new workflow, the only options it gives (certainly on my system) is to create it locally. You can later deploy something to the hub and open it from there, but again when you save, it is saves locally by default and you’d have to explicitly opt to save it back to the hub. So you’d know about it if you had done so. In all those steps you would still have had to have saved it locally before deploying to the hub the first time round.

Certainly if you have an empty local workflow folder it would suggest you were working locally albeit without having saved.

Although I think your hub login is the same as for registering your account, if I recall, you do have to initially login to the Hub from within Knime itself, so you would have to have performed that action for Knime to access the hub.

Are you able to access the hub now from within Knime now? That does require an initial sign-in action in Knime itself (e.g. by double-clicking the “Public” folder in KNIME Explorer.)

I hope this helps at least in part, even if it doesn’t bring back your lost work, and again welcome to the forum!

First, thanks so much for the warm welcome! It is much appreciated. I’ve meant to do this for a long time. A colleague of mine from prior times used it assiduously and swore by it. Still does.

And thanks for the suggestions and commiseration… guess we were victimized by the same update.

I guess I’m getting older, but I could have sworn that I saved the file repeatedly, as you say, the cardinal rule of analysis! but I guess not. Crazy thing, it was open for a couple of weeks and I was working on it on and off, but I never saved it? Hard to believe but no doubt true; freshman user error! Fortunately, it was an initial run that I knew I would be revising and refining a lot anyway, but just trying to get some of the logistics down. Still, I hate having to recreate it. But, Alas and C’est la vie, c’est la guerre!

I will turn on the auto-save, but as you surmised, with an older laptop and lots of things open, it might be a bit onerous on the poor little chips in there… I’ll try the “without data” mode and see if that doesn’t constrain me too much.

Again, thanks for your extensive response and screenshots and everything else. Time to just stop trying to find shreds and move on!

By the way, have you used the Decision Tree yet? In prior years, CART was my favorite tool; my initial try on Knime didn’t work very well, and I need to figure it out better. A number of years ago I ran the Predictive Modeling group for a major bank, and we used a suite of tools from Salford Systems (used to be called the Salford Predictive Modeling suite, or SPM) that included MARS, CART, TreeNet (Stochastic Gradient Boosting - also in Knime!) and Random Forests (Also in Knime)… best set of tools I ever came across, best GUI and the most useful for mining and rendering and variable selection. Salford was bought out by MiniTab a couple of years ago and I’ve not tried to get their newer versions… pricey for a private guy… I knew the principal and founder at Salford, Dan Steinberg, who was a close associate of the creators of CART, TreeNet and Random Forests… (Jerome H Friedman and Leo Breiman), and began using it for virtually all of our developments and analytics… Still used SAS for some work but TreeNet models were just plain superior. I digress… ahhhh the good ol’ days (yes, I am a bit long in the tooth…) Anyway, just wondered if you’d tried it or had any luck with it before I dive back in to Knime Decision Tree (and the others, for that matter). I really did also like MARS (Multivariate Adaptive Regression Splines) which simply provided a simple pictorial of each variable’s inflection points versus the target, but I don’t see anything like that here. At least yet. If you have any insights there, that also would be great.

So, broken record, thanks again. And Onward!

Be well and perhaps we will continue the conversation… Jon

Hi Jon (@farrarjonc1), sorry I should have replied sooner instead of bumping this back up the list, so apologies to everybody else!

Unfortunately no I haven’t used those other nodes or tools you mention, but maybe some others here have, or could give insights on them.

My own background is more software engineering and relational databases, so you’ll tend to find me answering questions on logic, extraction and transformations but very little on the data analysis/prediction/learner nodes which are very much not my strong suit! I am learning about those slowly but my use of Knime is very much more lift-transform-shift than the analytics side.

I know Knime doesn’t really pitch itself as an ETL tool, but I think it’s a demonstration of its versatility that it can be used for that kind of process too. I wish I’d discovered it years ago as when I consider some of the tasks I’ve painstakingly coded by hand as a combinations of maybe msdos bat scripts, Java/JDBC applications and a spattering of Excel VBA , I look back and realise that in many cases, with Knime, I could have had the entire job completed (and tested) by lunchtime, or even while sitting discussing the requirement with the client!

p.s. I hope you’ve managed to prove that the “save” function works on your installation. I agree that it seems odd that in the space of a couple of weeks it hadn’t saved at least once!

In general your own system might have a backup strategy like using TimeMachine or savin (ok well…) the KNIME workflows oin a DropBox Folder or OneDrive that would also offer some history.

Then you could create your own ‘dirty’ backup in KNIME itself. The KNIME server comes with a built-in versioning and trash-can so you could have an additional layer of security.

Make your own backup

@zedleb I created and example where the KNIME workflow (or workflow group) is being zipped into a file with a current timestamp. And can later be restored to a (separate) folder. [image] [image] This restore can either be automated also or you could do it manually if you need it. [image] [image] Please note you will have to configure the Path variables and workflow names to your needs. I use local paths that will be created dynamically.

@nusoel welcome to the KNIME forum. First: you should always have an independent backup strategy including provisions for accidental deletion as well as version management and disaster recovery (in case the drive gets lost). Having said that: if the data is absolutely critical you should stop doing anything with the machine and contact a professional data recovery service (like Ontrack) since this might be the only chance to get the file back if all other measures fail. Professional recovery s…

Thanks for the reply. Yes, the Save seems to work as does the auto save, so I guess I was just being negligent. And, with your mention of the ETL aspect, I thought perhaps I’ll try the scoring features to see how much time I can save… No doubt quite a bit. Onward! Be well…

Thanks, all, for your welcome and help! I’ve clearly got a ways to go with this and I especially like the idea of creating the zipped workflow and restore idea…

I have a few different networks feeding in to my spot here, and there is some backing up (for one of them) which does occur. Unfortunately, what I’ve been working on isn’t in the partition so “poof!” and away it went. I thought my OneDrive might have gotten it but alas there as well. So, I’ve recreated my workflow and won’t miss the saves this time around.

Again, thanks to all and here’s hoping the year goes well for you all…

@farrarjonc1 thank you and hope your year is also going well.

Two additional hints. Although unlikely in this case it is possible that you could have a problem with your hard drive or the handling of special characters. And lately I had the case where a workflow that was left open although previously saved disappeared. So backup and versioning is a thing. It was a windows server that would auto shut down the session and the left-open workflow did not survive.

Additional hints can be found here: