I’m trying to code a Drop down list in Excel through a Python Script node 1=>1, when I run it, it says “Execution succesful” but it doesn’t do anything on the excel file.

Here is the script:

Is here somebody with experience with this that can help me?

Would this be an option for you as well?
Cheers, Iris

Honestly I haven’t used Value Selection node, I tried it but it didn’t make any difference.

Is too much to ask if you post an example of this?

I attached a workflow that uses your example to create an Excel file via Python. And also one from the example from before. I think you have to provide the Python Script with a valid path (in this case I used the path of the workflow) and you have to close the file at the end. 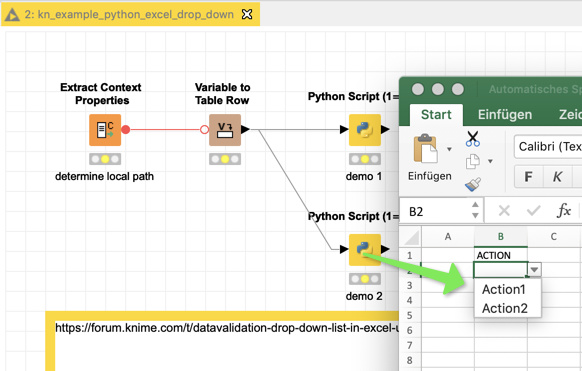 This is pretty good! Thank you so much for your example.

Sorry for the late reply. Yes that should be possible with the openpyxl package.

Openpyxl tutorial shows how to work with Excel files in Python using openpyxl library. The openpyxl is a Python library to read/write Excel 2010 xlsx/xlsm/xltx/xltm files.

well … there is a way. You could use the Python module openpyxl and open the stored excel file in Python and do some manipulations and then save it again. Openpyxl offers a wide range of possibilities. Please be aware that this might not be the most stable way, and it could get tricky if you have large or complicated Excel files. [image] [image] kn_example_python_excel_manipulate.knar (54.5 KB)