Requesting help with an issues with R nodes in Open Source BI Tool KNIME. I want to dyanamically change my URL at runtimw for which i did string manipulations in R and it worked, Script is as below:

Now i want to change this variable(VAR) dynamically and this value will be inputed through a knime node, which in my case is table creator node. I will be putting different value in Table creator so that those can be accessed in R Snippet through ‘knime.in’ . and same can be used to manipulate string in order to get R which then can be used to search Browser and get the result. 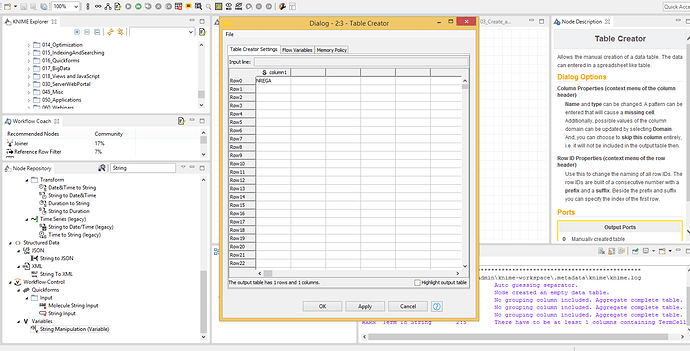 Hope this helps to understand the issue that am facing…

You would have to remove the first row from the script and use an assignment like this:
var <- knime.in$“column1”[0]
or loop through the values of knime.in$“column1” (because it is a collection of the values you inserted in column 1) in your R code to create the individual URLs.

BTW: If all you want is to create URLs with a static and a dynamic part, you can also use the String Manipulation Node after your Table Creator Node. Just use this piece of code:
string(“https://news.google.com/search?q=\”"+$column1$+"\"&hl=en-IN&gl=IN&ceid=IN%3Aen")

thanks for the help…