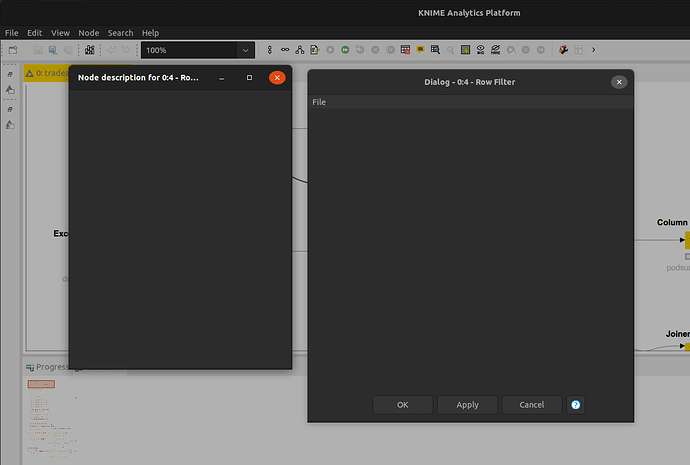 I’ve tried messing with themes, but to no effect.

In help window there seems to be some text (guessing by mouse pointer), but config window seems blank. It also seems like it’s offset is far to the left, outside left window border.

This may be related to custom windows, because Eclipse’s loading sceens, settings, and other windows are okay.

Data table view of any given node is fine.

No other suspicious entries were found.

Any help is greatly appreciated, as I may have to revert my OS to previous version.

update: on KNIME 4.1.3 help window works. But config ones are still empty.

Okay, I got it. This happens on Wayland, which is now default graphics server in Ubuntu.

Switching back to XOrg on login screen solved the issue, windows are now displayed properly.

I guess this subject now becomes bug report. Shall I provide more information?

and welcome to KNIME Community. Seems like a known issue in “the fractured world of Linux”:

I am trying to edit some workflows on a remote linux machine (more accurately it's CentOS Linux Release 7.3.16111 (KDE 4.14.8))  - when I open any given node to either configure it or view the data output, it is currently displaying a blank screen like the one attached. I have tried multiple workflows and I still cannot see the configuration window or data output of the nodes. I am currently running Knime version 3.3.1. I have also attached my knime log which contains the logging for the outpu…

Good find, I was not able to google that. I was not aware issue has been present for so long. Since Ubuntu default graphics server is changed I expect more users to look for help. And maybe even someone manages to fix that?