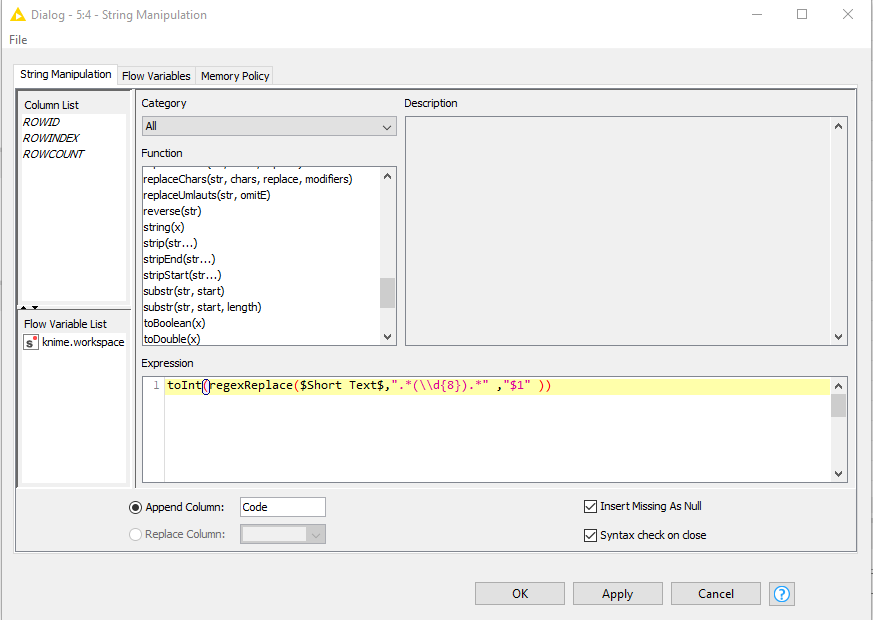 Sorry what should I change here to correct it? This is the workflow shared by @mehrdad_bgh

As I said, regex is not my strength, until someone comes with a better expression, one dirty way I can think of is to do it in 2 steps like this:

It’s dirty but it gives you the results that you want.

Sorry for delay.
Write this line in string manipulation node:
toInt(regexReplace($column1$, "^.*?(\\d{8}).*","$1" ))
I used toInt function to maintain missing values, You can delete it.
The previous regex was not accurate, my bad.

That elusive “?” in the regex pattern answered a question I had when I was trying this out, as the behaviour of the Palladian Regex Extractor is different to String Manipulation and Regex Split.

I was trying out the original @elsamuel’s original suggestion of \d{4,20} on the Regex Extractor and it worked just fine.

However, trying to make it work with String Manipulation and Regex Split wasn’t working for me

With the insertion of the ? the behaviour of both those nodes was (mostly) fixed

The returning of the entire cell where the digits weren’t found was “fixed” in this instance with the inclusion of the toInt() as in your example.

It was interesting to note the slight variations in behaviour between the different nodes, and for sure it shows that the Palladian node was easier to work with here, but useful I think to see the differences in outcome, which I wasn’t expecting.

Regex Split also resulted in a warning where the pattern wasn’t find which the others didn’t.

I’m agree with you, Regex Extractor is best node for issues like this.

And you can add Column Expressions to your list:

Thank you so much @mehrdad_bgh @bruno29a @elsamuel @takbb for all your help! Really appreciate it! I was kinda hesitant at first to post a topic/ask a question afraid no one will notice or reply. But you just save my day! Again thank you so much!

@AlyKnime I think you will see there is no need to be hesitant! I have worked with many pieces of software and belonged to many software-user-communities over the past 30 years or so, and in my view, without a doubt, I would say that with Knime, the community has to be the most active, responsive and helpful I have seen, even though I’ve only been a member here for only one month myself! I think Knime users are really passionate about this platform (and rightly so) and it shows! I am finding Knime addictive (in a good way!)

@takbb I agree with you community is very helpful and responsive. I am also finding Knime addictive (in a good way)

to the point that I really want to learn everything!
Hopefully in the future I’ll be able to share knowledge, the same you guys did to me. Thanks again!