Feature Request: Column Rename - Make it possible to change which column is a particular rule assigned to

I learned I use the Column Rename node very often. I usually have got many nodes of this type scattered all over my workflow. This is most often because of lots of nodes don’t give an option to set a name for columns they produce; Let’s mention Group By node as a typical example. I typically end with an executive node that does some difficult work with data, followed by a Column Rename node.

As an experienced programmer, I’m used to refactoring my code periodically to make it more readable and understandable. This means I rename identifiers shortly after I learn their names don’t match their purposes. When I do this, I’m supposed to edit the nodes this operation affected. It’s a bit annoying and I’d appreciate the IDE would support such a refactoring a bit. But the Column Rename node is a tough one in the path. If I have a renaming rule in it, it is not possible to change which column the rule belongs to, which column is to rename. The only way is to re-create the rule using another column. It’d be fine being able to change the current name of the column here. 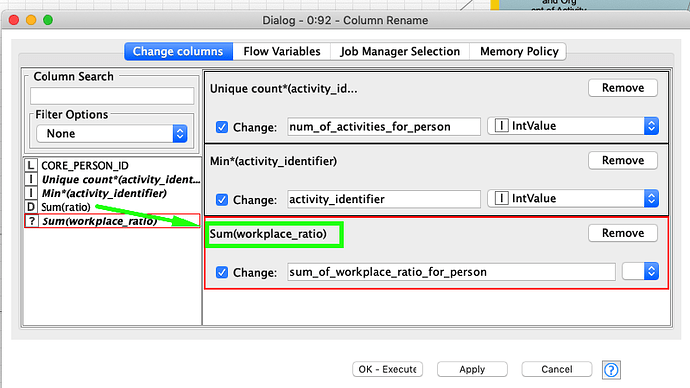 image799×450 49 KB
In the case above, I’d like to change the settings that the column Sum(ratio) would change to sum_of_workplace_ratio_for_person. In this case, I’d like to change the current rule to work with the column Sum(ratio) instead of the former name Sum(workplace_ratio). The way I’m supposed to achieve this is to make new rule for the Sum(ratio) column and copy-paste the current settings (the text-field labeled Change:) to the new rule.
2 Likes
ipazin October 3, 2019, 11:22am #2

I understand what is troubling you and kind a like what you proposed. Although I have to mention it is not just Column Rename node that works this way (GroupBy and Pivoting in Method Aggregation tab for example) so not sure how easy would be to implement your proposal. Maybe logic similar as in Table Validator node?

Anyways can check and will get back to you.

Edit: Feature request has been made.

If the names are similar yet unique, maybe the regex header rename could help (as a workaround)?
you don’t even have to create a fancy regex covering all cases, just couple several nodes in a row.
Unless you have a way to many headers of not predictable names.

Hi @docminus2! Many thanks for your hint. I’ve got your point. And yes, it is a perfect solution I already use. For simple cases when I just need to get rid of those annoying rubbish Group By node enriches column names declared on its Manual Aggregation tab. This is another story. In those cases, the solution you recommend fits my requirements, I can get my original column name back using the Rename Column (Regex) node. But this solution won’t fit if the new name of the column has nothing in common with the original one so it doesn’t solve my problem completely.
Regards, Jan