Would it be possible to have the nodes such as

(and there are no doubt others) to warn on clicking cancel if there has been any change to the text?

Ideally cancel should always request confirmation if any have been made, but for me it’s not quite such a problem when the node is simply a series of selections, However, when you physically type out an involved series of logic expressions, particularly in the Column Expressions node, and then have it disappear in a flash by inadvertently clicking the wrong button, it is, at best, frustrating.

I get bugged by Knime whenever I click “OK” without having made changes to a Node, yet it is happy to silently exit when I HAVE made changes and press Cancel.

I didn’t find anybody else mentioning this anywhere though, which surprised me, so maybe there’s some option I haven’t found (or perhaps everybody else is just a lot more careful than me!

I have been trying to work out what it is about the Column Expressions node, that makes me particularly prone to this problem. I have fallen foul of cancelling there on several occassions, whereas the same isn’t true for the other nodes.

I think it’s this: 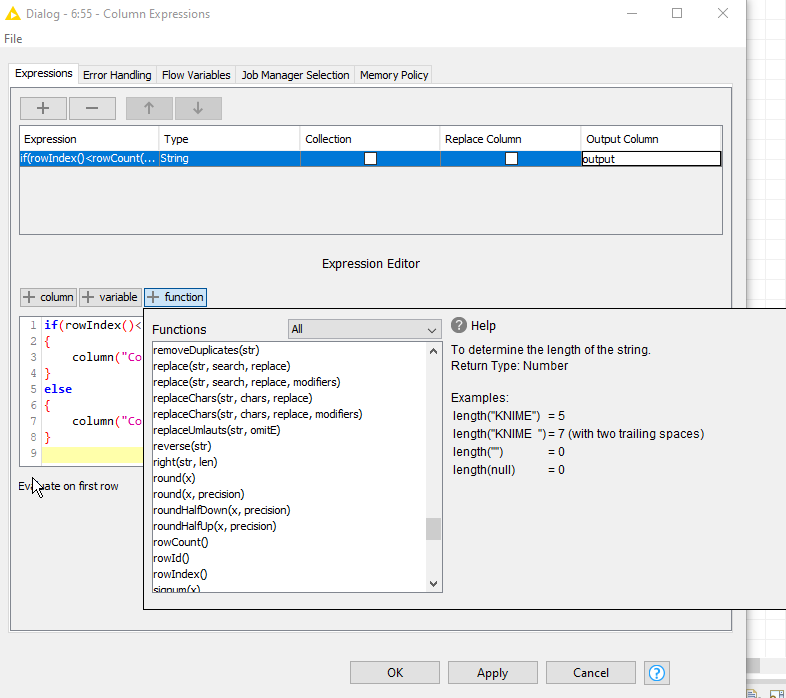 When I click on +function, to go see help on a function, but don’t actually wish to choose it, my natural spontaneous instinct (especially given the placement of the popup dialog is to go physically choose to close it. (So my muscle memory causes me to go press a cancel or close button). I know that I should just click elsewhere to have it disappear, but that isn’t my automatic behaviour.

Now that I realise what it is that I’m doing, I’ll probably stop, but from a UI perspective, I’m sure you’ll agree that having a “cancel and lose your work without asking if you are sure” option does not really conform to good guidelines for a UI.

I agree on the “OK” asks twice, but “cancel” doesn’t and thus should have an additional layer of double-checking. On the other hand, it doesn’t happen that often that I cancel something and mess up my expressions. It happens more on the OK side.