Hi, i have the next problem maybe you can help me.

In the first column I have a vehicle mark and the second I have the model, I must generate the third column but only with the name of the brand as in the attached photo. Has someone been able to do something similar? 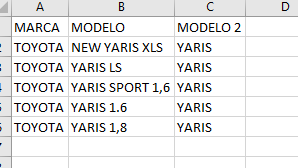 May I ask for more examples of your dataset?
I want to be able to consider different cases. Applies the rules from the second input port to the first datatable.

I used to do some work with automotive datasets in the US. This is potentially a quite time consuming problem, due to the wildly varying nature of car data when looking at specifics of trim, engine displacement, and so forth. If you only have a small subset of possible models to deal with, maybe it’s not so bad.

If you’re looking at data for vehicles in the US, you might check out the Vehicle API provided by the National Highway Traffic Safety Administration. I’m sure there are similar datasets available for other countries, I’m just not familiar with those.

Considering @ScottF’s suggestion and the node suggested by @izaychik63, I can suggest you to do this:

Find all the model groups available (those like YARIS) following what Scott suggested and keep them in a separate table. Use a String Manipulation node to create rules for Rule Engine (Dictionary) suggested by @izaychik63. The rules should look like this:

To create such rules, assume you have all the available models groups like YARIS in a column named “model”. And now you want to apply rules on a table like what you have provided. So the expression in the String Manipulation node is:

This will create rules like my example.
Now in the configuration window of the Rule Engine (Dictionary) node, use the column containing the rules as the rule column and the model column as the result.

I think this will do what want.

P.S. If there are same models for different marks then you can edit the rule to mention the mark as well.

i will try it now, thanks.