The “Sum” aggregation method in the GroupBy node does not allow me to include missing values:

Suppose a hotel owner has a problem with a tarantula invasion. He sends his employees to check all hotel rooms and count the number of tarantulas there:

After discovering 8 tarantulas in room 104, the employees refused to check room 105.

The hotel owner now wants to know the total number of tarantulas in his hotel by using the GroupBy node:

@Aswin , I would recommend to use Row Filter to check on missing values before Group by.
The logic of processing in case missing values re identified could be different for different scenarios. That is why it is hardly reasonable to include this processing to Group by with possible lost of speed.

to imagine how serious this could be, replace “Tarantulas” by “VotesABCPartyPerCommunity”, and you want to know the total number of votes cast for this party for the whole country. In this case the sum is very misleading if missing values are ignored when calculating the sum. In this case the best solution would be if the missing value is “carried over” to the final result. Also, the loss of speed would only occur if the user consciously selects “include missing values”.

I do not see how a simple row filter would help me here. I came up with this workaround:

The 0/0 results in the desired missing value.

By the way, I use Pivoting instead of Transpose for the final node to avoid a problem that I mentioned on this forum 2 years ago:
https://forum.knime.com/t/bug-report-transpose-forgets-column-type-for-missings/19749

I hope that’s what you’re looking for

Thank you @natanaeldgsantos but I was already using that aggregation option in the workaround that I described above:

how about this workaround?

But I still think it would be a useful feature to have the “Missing Value” checkbox available and active for the Sum (and Mean etc) aggregation option, as it is shown in the UI already.

and add all tarantulas together using Math Formula’s COL_SUM: 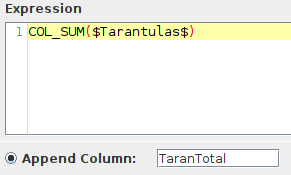 However, when I add 2 columns together using the same Math Formula node… 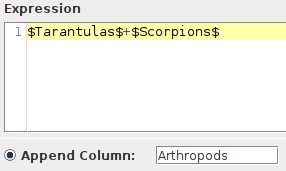 As described in the help text. It turns out that “COL_SUM” ignores missing values, but “+” does not…

How about the Column Expression node?

Funnily enough, the Column expression node has the “isMissing” and “Missing” functions. That means I could do something like this:

How about the Java Snippet (simple) node?

Writing this was as much fun as I had with my base-0/base-1 indexing post. It is also similarly inconsistent and it is often hard to predict what will happen with missing values in advance. In case of the Math Formula node and Column Expressions node, the node itself seems to be inconsistent.

A post was split to a new topic: Missing values in Moving Aggregation vs Moving Average

tnx for summarizing it. Have created ticket for GroupBy node so let’s see. (AP-17637). Upon news someone will update topic.

Your last reply/question moved to another topic to get proper attention.

please open up a new topic, describe your issue/question as best as possible and someone will assist you. Don’t reply in random and unrelated topics. Here is the category you can post in: