I need to implement a multirow formula similar to Alteryx.
Problem: 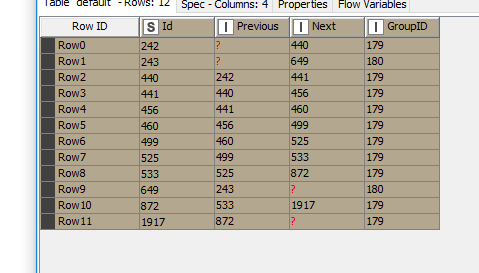 I need to group by the groupIds and then calculate the positions based on next and PrevId. If Previous id is null position is 1 and then increment it based on Id column.

Help and a sample workflow appreciated.

Help needed with nested loops in Knime
How to use a group loop and a recursive loop together?
sauravh86 September 2, 2020, 9:01pm #2

Could you upload an example and maybe explain what it is with the Previous and Next Information. Are they relevant for the Position or should it be possible to just use the IDs and their number (or position).

Thank for the reply.
So id is the current state, previous is the last state and next is the next state. I need to calculate the position depending on the last , current and next state grouped by GroupIDs.
For example for Groupid 179 in row 0 previous id is null that means position is 1 , for row 2 previousid is current id for row 0 , hence the position is 2. We have to calculate positions for a groupid untill the next id is null. I hope i have not confused you more.

OK, I produced a solution with the help of Hive/SQL

You could adapt the ORDER statement to get a different sorting. 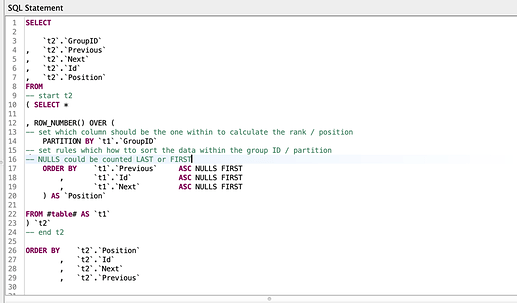 This should give you the result you want. I would have to see to do this with just KNIME nodes. 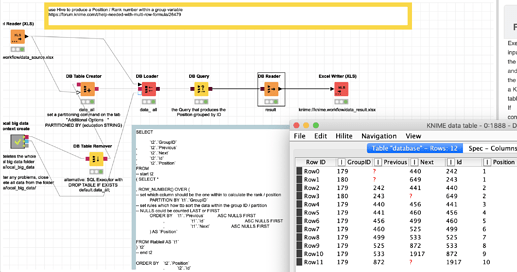 if I understood it correctly to get your position column you can use Rank node as you can define Group column there. Only prior to it you can add Counter Generation node based on which you will do ranking.

The problem is not yet solved the IDs, previousIds and Next ids are not sorted in the data. Attached is the copy of the data. I would really appreciated if you can send me the logic for sorting. We want a kinda vlookup in the table itself.Book2.xlsx (13.5 KB)

In the file for check for track 189, I am not able to calculate the position

I am not sure if I understand what you want. Have you checked out the example with the Hive command and Rank.

You might want to describe in more detail what your original data is (maybe give an example of that) and describe or define what you would like to happen to the data and maybe a matching result to your data.

In the below mentioned example the first next 2894 becomes current in the fourth last row. So basically sorting will not work. We need a recursive loop and self join. (vlookup in excel)

I am very sorry I do not understand you varying examples in different formats, eg is the order a given and might be represented by a sequence of numbers 1,2,3, or does it depend on the Next.

My suggestion would be to try to explain again in more detail what you want to achieve - maybe what kind of loop or iteration you would like because such things should be possible in KNIME.

Maybe you create an example and explain what you want to have.

@mlauber71 attached are two excel sheets . One is the actual data and second is the expected output. We just have to grab a nextid and search it in the currentid /ID column and calculate the positionExpected.xlsx (13.0 KB) Actual.xlsx (9.3 KB)

I will have a look but it might take some time. And you might have to give some more explanations. What data is there in the beginning?

Sure, I need to deliver it by Monday sooner the better

From a quick look it seems to be the same data like before and I still might not understand what the initial information is and what should be the outcome.

Also an example should cover the entire challenge.

I have made a sample workflow, its working for a single track but not working with group of tracks.Attached is my workflowPosition_test.knwf (131.9 KB)

Position_test.xlsx (15.0 KB) Attached is the source file, since i cant upload the csv i have converted the file to xlsx. Help really appreciated

this workflow should give you the outcome which you expected.