Is there any node to write a Python Script to output visualization?

Hi,
I would like to know if there is any functionality where we can execute a Python script which takes input data and provides a output containing visualization. The node is pretty similar to plotly visualization nodes but instead is it possible to write custom code in Python script node and get a graph as output?

For example, input a data table to a node containing custom python code to create a bar graph and this graph can be output of the node?

How about the Python View node?
gr. Hans

Here are a few examples of some graphics in python and exported from KNIME.

Question is what kind of output you would expect. KNIME and Python would typically have three generic outputs data manipulations etc using Python build prediction models and save them use graphic packages like seaborn and export graphics (as PNG) I modified an earlier example to show all three (if you just save results from Python you might use much more), and also there is the ability to integrate Jupyter notebooks in KNIME. [image] kn_example_python_logistic_regression_iris_graphic.knwf …

Thank you so much for sharing this. I actually got it working for basic things.
However, when I was trying to build a histogram, I’m able to see it when I execute the script and click ‘Show Image’, but I entirely different image when I execute the node and view the Output image. I think I’m making some mistake while saving it in the buffer.

I tried using StringIO from io package but then I get ‘No Image generated’. 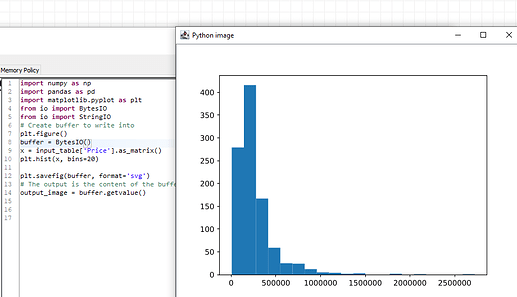 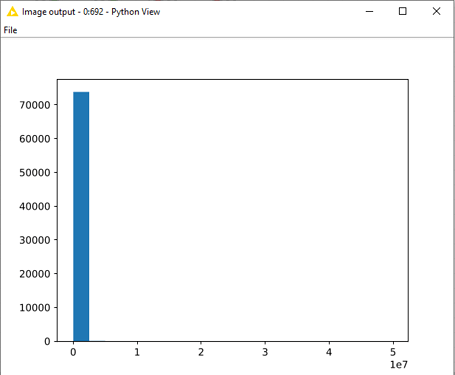 Could you provide us with an example that reproduces the error?

Hi,
There isn’t any error as such. It’s just the script execution results in a correct histogram. However, when I execute the node it gives a different output image like in the screenshot.
I’m not sure where I’m going wrong.

have you managed to figure it out or still need help?

Hi @ipazin,
I just checked and it’s working okay now. Although, I didn’t change anything but just seems to work now.

Thank you for all the help.