Thanks for reporting this - I will take a look, as clearly that shouldn’t be happening.

OK, an update. Firstly, thanks for the detail above - very helpful at locating where the problem is arising in the code. What I dont know yet is why this has come about. My guess is that something has changed in the innards of the RDKit code which this is built on.

The row which is causing the problem is this one:

My guess is that the problem arises when one of the N±CH3 bonds is broken, as the error lies in the part of the code in which stereochemistry is assigned to double bonds where there wasnt any previously. This molecule should give 2 isomers:

I will try to figure the cause behind this and get a fix out. I’m also going to tag @greglandrum here in case he has any obvious lightbulb moments about changes to the RDKit.

When the above fragmentation happens, in order to differentiate E- and Z- fragments, the node looks at the C=N+ double bond, knows it did not have any stereochemistry assigned to it, and attempts to assign it. It does this as follows, for both ends in turn. 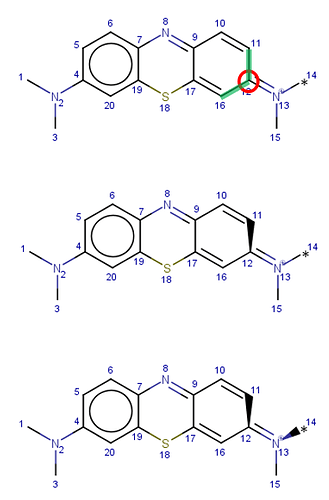 What happens is that atom 12 (indicated) is checked first, and previously the two highlighted bonds were identified as candidate bonds. The bond to atom 11 ‘wins’ (11 < 16), and so this bond is assigned ‘up’. then we repeat for atom 13 (the N+ atom), and the a bond to atom 14 (an attachment point * atom in this case) wins (14 < 15), so again this bond is assigned ‘up’ as shown.
Unfortunately, RDKit is now identifying the ring comprising atoms 9-10-11-12-16-17 as aromatic, and so the two highlighted bonds from atom 12 to atoms 11 and 16 are no longer ‘single’. The result is that the code currently finds no candidate bonds for direction assignment, but still blindly tries to find the first such bond in the list - and… BOOM! This is the error you are seeing. I’ve no idea why RDKit has changed behaviour here, but I think it is fixable. Hopefully I can get something out early next week.

(Incidentally, if you follow this through for the other N±CH3 bond breaking, you can see why the arbitrary-but-consistent approach works: 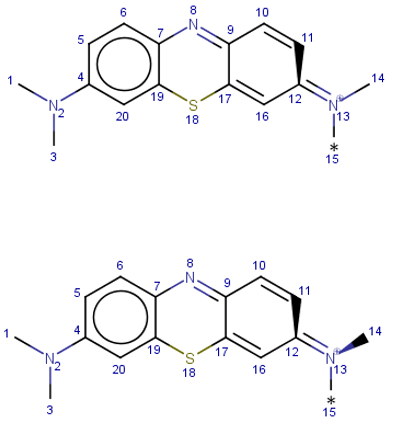 This has now been fixed in nightly and stable builds for v 3.7 of KNIME - see Update to v1.20.2 - MMP Bugfix for details

Thank you Steve for your detailed issue description and its super fast fixing!