Here are the same columns in the output view (I get that there’s a good deal of rounding for the table view).

Here are my Moving Aggregation Node Settings. I have removed the flow variable for window length and the pattern based aggregation I was using (I was using DNAnnualPOF as the number of columns could vary greatly based on earlier inputs) in order to troubleshoot my issue. 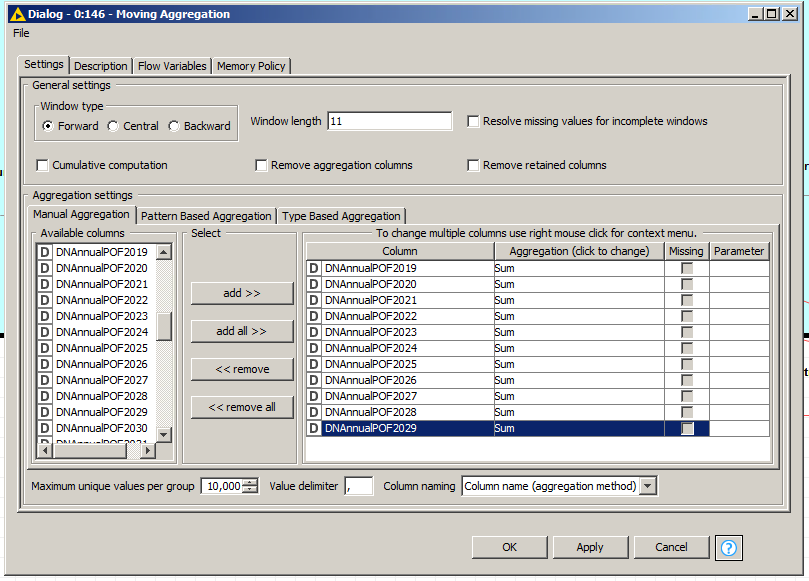 When I get the results…the sum doesn’t really come close? It shows 8.3%. I’ve tried adjusting the window up and down to see if I can get it to produce the right number, but I can’t figure it out. I’ve tried reducing the window down and it gets ‘more’ accurate as I reduce the number of columns I’m summing, but that really doesn’t fix my issue.

Any thoughts on what I’m doing wrong.

Wonder if this would work for you…you will still need a loop to iterate through a decade at a time but at least you wont have to use a nested loop.MovingColumnSum.knwf (16.7 KB)

Hi @mir50531, have you tried to use the Transpose node before applying the Moving Aggregation node?

Thanks @agaunt. That’s a good idea I hadn’t considered. Right now I have about 1,800 rows, but eventually I’ll have about 2, 3, even 4 million. I could do it in chunks maybe? I did end up coming up with a solution, unfortunately through lots of trial and error. At the risk of revealing my lack of KNIME experience, I’ll post what that looks like. I found out after my posts that the first column is always the same, but the number of columns to be summed (including the first one) changes with each iteration. So I bring in variables before the first loop for the first year (2019) that needs to be done and the first count of columns to be summed for each row (11). The interior loop renames the 11 columns to have the same naming convention. Then I aggregate using wildcards after that loop completes and append with one column for 2019, with the sum of those columns for each row. Then I use the current iteration for the outer loop to both increment the year to 2020 and the column count to 12…then repeat the process.

Have you tried using the Column Aggregator node? Unless I’m missing something obvious - entirely possible! - that should be all you need to sum up column values in the same row. No looping involved.

@heshanhenry Sorry! I didn’t see your post for some reason. Thanks for the workflow! It seems like you and @agaunt both suggested the transpose method. I may give that a shot.

@ScottF Let’s take this example. I have a number of annual columns from 2019 through 2059. I have the following variables:

Can the aggregator do that w/o a loop?. I think the moving average may work if the transpose isn’t too taxing on the system.

Ah, OK - in that case a transpose approach may be better. There probably is a way to do this using Column Expressions, but it would involve a lot of flow variable manipulation, and I’m not sure it would be any easier to deal with than what you already have.

Thanks. Speed is going to be important as I scale this up. Would the column expressions be faster and more efficient for executing? and vs transpose?