Mulitple rows with unique ID combining in one row

I’m new to KNIME and struggle probably with an easy to solve problem. Although I have not seen any query with this problem.

I have two input tables with various rows all having the same unique ID but different content. I would like to have one row per ID combining all data sets either in one column (output #1) or on mulitple ones (output #2).

Example: I have two tables that contain identical unique ID’s but different content. I want merge them into one row with all combined content. 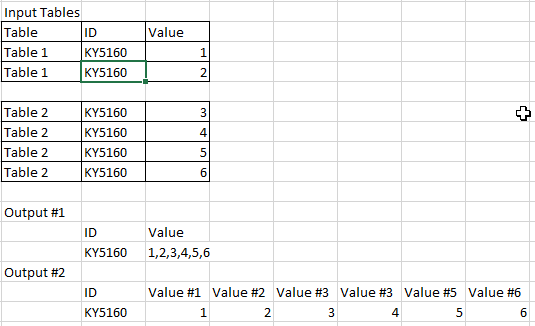 It’ll be great if some of you could point me to a solution.

@knickmanns Welcome to the forum!
I don´t know if this is the simplest way to do it.
Create a table like this: 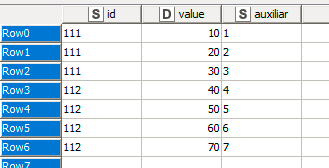 and then use the pivoting node. This gives:

What @iperez suggested here is what I was thinking of.

Also, for the second operation to generate a comma separated string, take the pivoted values generated above, clean them up a bit, and use the Column Combiner node. Or alternatively, implement the Create Collection Column node if you prefer a collection.

concatenate and group by nodes should also work
bR

I tried your proposal but did not make it work.

How can the groupby node write the “value” column parameters from different rows in one column or separate ones?
With concatenate and groupby it looks like this.

Many thanks for you help and the pivot node. Still I can’t make it work. I haven’t found out what the auxilar shall do.

The pivot node requieres at least three different variables to work: One for creating the groups (rows=id), one for the columns (here is where you use the auxiliar column, one for each value) and one to do the aggregation (in this case your “value” attribute).

it finally worked. Many thanks. The groupby node also offers the perfect filter to unique entries.

Great thanks for your update.
BR