Trying to insert \n between RULE field and CONDITION field in string manipulation node before passing it to RULE ENGINE DICTIONARY node ,so that both the condition can be used as one rule but it is throwing an error:
Row0 $UNQID$=1=>$EOPBALLCY$ TRUE=>0 Garbage at end of rule detected

But when i write the same rule in RULE ENGINE as hard-code rule,It is working fine.
$UNQID$=1=>$EOPBALLCY$
TRUE=>0

Attaching the screenshot of string manipulation node as well where i have created new column(FINAL_CONDITION) join($RULE$,"\n",$CONDITION$)
which is the joined value of RULE field and CONDITION field

Kindly assist me on this.

Hi @sahil786
If you put the second condition in a new row of your table (the table as input of rule engine dictionary node), it will work correctly. 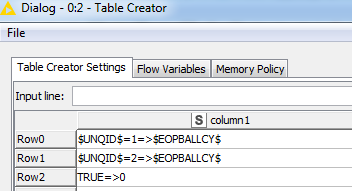 Thanks for the response…But I want to append the Default condition of “TRUE=>0” with each rule.So that if i the UNQID rule condition did not match with the data,need to populate 0 as the default value of
newly populated column.

As @FtmhRahimi suggested, you need to add the default condition as a single row so if none of the conditions match, the default value would be inserted.

When you are using the Rule Engine (Dictionary) node, all the rules passed to the bottom port will be used and the first match will be applied. Each rule must be defined in a single row. So it doesn’t make sense to add the default condition to each row.