When a workflow node is selected prior to keyboard entry, the program makes a new connection as you would expect. However if a connection line is selected the new node not only isn’t inserted into the flow, but is typically placed far off from the target area and difficult to find on large workflows.

This functionality would really simplify node insertion for those of use who prefer keyboard shortcuts / macros to the much slower drag and drop approach. For some reason I thought the change was slated for the 4.7 update, so I just wanted to keep it on the radar.

Hello @iCFO, thank you for reporting this.
I can’t commit to anything, but at the moment our developers are busy developing the KNIME Modern UI, which will bring a lot of improvements in node insertion.
For example, there is already a quick node insertion functionality up and running. It works via mouse drag and drop at the moment, but it will be expanded with keyboard support in the future. 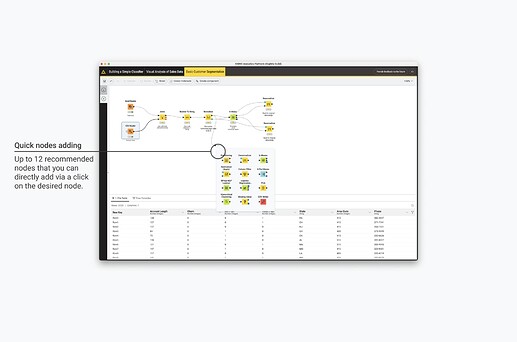 I can imagine that this would also support “between node” insertion. In the meantime, thank you very much for your feedback, I’ll report it internally.