I have a workflow with a loop, and inside that loop, I get a table with some different columns each time. In order to create some graphs, I have a wrapped node with a Moving Average Node. That table has one date column with continuous date values for each day (always with the same name) and several integer columns, with different columns names in each iteration. Moving average Node doesn’t have a regex o wildcard filter, and it generates an error and stops my workflow when a column name change. When it happens, I only have to open configuration of Moving Average node, and press “Apply” button, without any change, and the error disappears, and the loop can continue, until next name change.

To ensure static column names entering into the “Moving Average” node, insert “Column Rename (Regex)” node, it will always outputs same column names like col_1, col_2, etc. Then (if needed) you might change the names back to original ones at specific point of your workflow using “Column Rename” node. 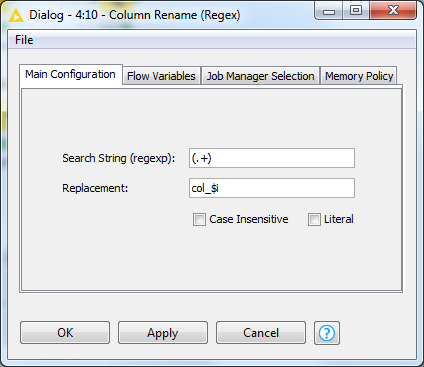 Well, finally I solved the problem replacing Moving Average by Moving Aggregation Node. This node allow you to automatically select the columns to include (by type or pattern) in the aggregation, what is something that you have to do manually in Moving average (and obv cannot be changed inside a loop).

Thanks for info, I enjoy you have succeeded

Thanks very much for the neat fix!