Replace RowID by a flow variable

I’m trying to use the RowID node to change the “Row Id” by passing to it a Flow variable, I mean: Node to replace the RowID and/or to create a column with the values of the current RowID.

Yes, I’m actually using it. What I don’t know to do is how to pass a flow variable to it to create a “New RowID Column”. So in 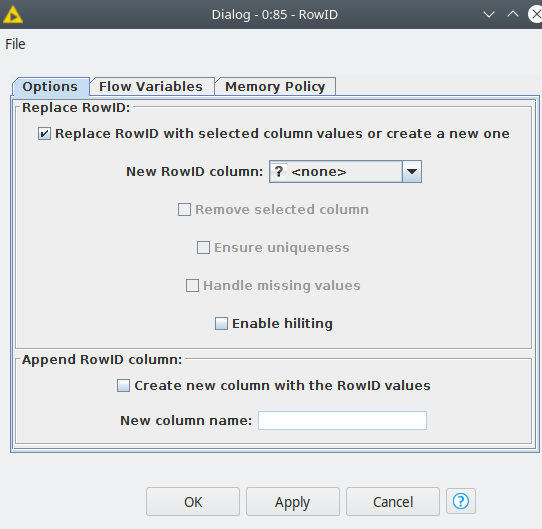 Then use Append RowID first, modify column values and use new column in Replace … dialog.

OK but how to append first with the value of my flow variable? So the problem here is how to replace or append with a flow variable that is coming from a “Java Edit Variable” node.

I want to put de “R0” string coming from the “Java Edit Variable” to replace the “Row0”.

you could use a constant value column and set that as RowID. Of course if there would be more than one Row you might consider what that would do to the IDs.

How does it work? Constant Value Column does not see Row ID column.
As I mentioned before, you can add column RN by RowID node to your table,
then by Rule Engine replace RN value using TRUE => variable
The variable will pass through variable port to Rule Engine.
Variable could be created by String Manipulation (Variable) node,
say using join(“R”, v_Row_N) or simply join(“R0”).
v_Row_N could be used as input variable for String Manipulation (variable) node.
Finally from Rule Engine use RowID replace Row ID with RN column value.

Thank you! It works!