Running List of Variables (as they are created) plus node source

Is there a simple way to identify which nodes created (or were the final editor) of a flow variable?

I like to do a variable audit as part of a governance procedure post workflow built. Identify redundant variables, see where variables can be used more effectively, etc.

I suspect there is a better way than my current process.

Ideally the report would be able to identify which nodes are using the flow variables was well.

I think flow variables are great but without a running list that updates as they are created the current approach feels a tad opaque. I would prefer to be able to see this list at all times.

Hi @ben_westphal, what was the answer to the first part (a way to identify which nodes created or were the final editor of a flow variable)? That sounds useful.

As for the question of which nodes are using a variable, I’m guessing some processing of the xml files for the workflow would be the route here although I’ve not yet taken a look at how that information is held. I’m wondering if a python script could be dropped onto a workflow and might be able to produce such a report in a simple table output. Or maybe some other equivalent mechanism. I know elsewhere on the forum there have been discussions on workflow that document other workflows so maybe they have some ideas that could assist. I think though that maybe you are looking for something more dynamic than this?

You can see the last node which generated the variable in the list of variables.

Thanks @Iris - I hadn’t even given a thought to what the Owner ID list with the variables was! Using that along with the Node-Find Node menu will no doubt come in handy one day when I’m struggling with a large workflow

In the variables list (I laughed when I realised my own question)! Note sure about your other comments. I’m looking for something more dynamic than in the xml file. Some sort of variable extension that allows you to keep an easy track of variable creation and usage. Such a feature would also give useful guidance on where to stress test a data pipeline. I’ll be sure to yell out if I find something. Thanks, Ben

Very good point! Yes if you have the ID, the search will bring you right to the node

Could you elaborate on that? Is that a view which needs to be activated in the settings?

Then you can find the required node 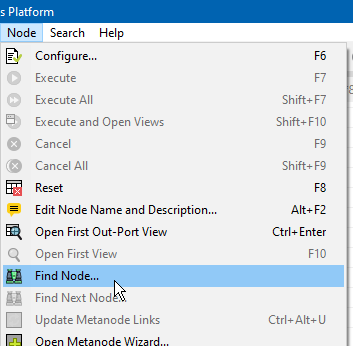 Is that what you were after, or have I misunderstood?