What I ultimately want to achieve is to be able to send “html reports” by email as email content. In fact such a node would be a very helpful addition. Because sending reports as attachments isn’t so nice if they should give the end-user a quick overview. Attachment means opening the attachment.This issue however is deals with trying to work around this not being possible.

All I want to send is a knime table as html that contains images. Images meaning the Lhasa table to html node doesn’t work. I even made a columns that contains html img with base64 png (or svg). Turns out gmail does not render either of these (and many other clients also don’t do that but gmail compatibility is all I need).

So for gmail to show the images correctly according to my research they need to be send as embedded attachments like shown here.(not the accepted answer but the on e below it)

So the question is how can I use KNIME to send an email in the format described in the link?

Answering my own question, it’s possible but complex.

cid = content id which is needed to display attached images inline of the email. So the content id simply is image-0, image-1 etc. Now you see why sorting at the start is required.

The Table to html node is used to convert the table to html. A second branch uses groupby node without group column to generate a list column containing all the base64 encoded pngs. Then the 2 branches are joined again with column appender.
This is done because the email is sent in a java snippet and hence we only want 1 row to send the email only once. Same is done for email adresses. they are appended as a list column to this table. This is a good point to show the workflow as it’s probably getting confusing by now: 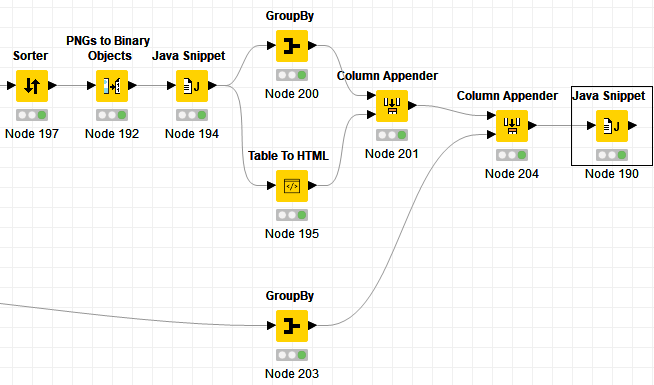 Here we use java mail to send the email. You will need the javax.mail.jar with must be added as additional library to the snippet. The code inside the snippet see below:

This will send your knime table per email with images correctly displayed inside the table.

Seems I can’t edit to add some additional infos.

If above doesn’t work mainly because the generated HTML is very plain, another option instead of the Table to HTML node is to use a Python Scripting node. The node already puts your table into a pandas dataframe. From there you can use the pandas styling feature to style your table (general look and feel, conditional formatting etc).

With these blocks one can build nicely styled html tables and send them per email.

In fact having this natively in KNIME server would be a huge enhancement or I’m missing it. Instead of sending PDF reports, the reports should be able to be send as HTML email. Especially for alerts. Else the users must click (and potential download) an attachment to see the content.

Thanks for posting your very detailed solution! It seems maybe you should consider changing your username.

I’ll make sure the folks on our side familiar with reporting see this too. Maybe there’s a way we can make this process more user-friendly.

I recently updated the Table to HTML (String) node to add some styling to the table. I’ll migrate the change to the release branches (it’s in trunk/nightly only at the moment).

I did have an internal change that accepted PNG columns and created the base64 img tags but I stopped working on it when I realised email clients refused to render them. Maybe it’s worth taking another look with what you’ve been able to work out!

Edit: here’s the details on the update

I suspect the rendering of the table is more down to the mail client you use and how it chooses to render unstyled tables. You could maybe look at doing some XML manipulation to add some inline styling to the HTML table that is generated. If you could give an idea of what you want the table to look like if I find some time I can look at adding some pre-defined styles or custom styling options to the node. I assume you are talking about things like border, background etc rather than number for…

The png/image part is problematic. I don’t think you can solve that on your side only. To make it work the email node would have to be enhanced, a lot.

Following is actually more for the knime guys than you:

I see a couple of changes needed, some might already be there but it’s not always easy to keep knime server on newest version when it’s out of your own control. The automatic email after worklfow completion can’t be customized (maybe it can in newest version?) so what we need to do is use a Call local/remote workflow node and have it return the report and then use send email to send a custom email.

Yes that is true, but I think the changed help with the styling of the table at least? Calling out to python for styled tables isn’t ideal if you don’t have to?

In any case the initial update with hard coded pre-defined inline styles should now be in KNIME 4.0 and 4.1 releases.

Currently building for nightly/trunk is a new addition allowing a user to specify styling of certain elements of the table as requested by @natanzi. 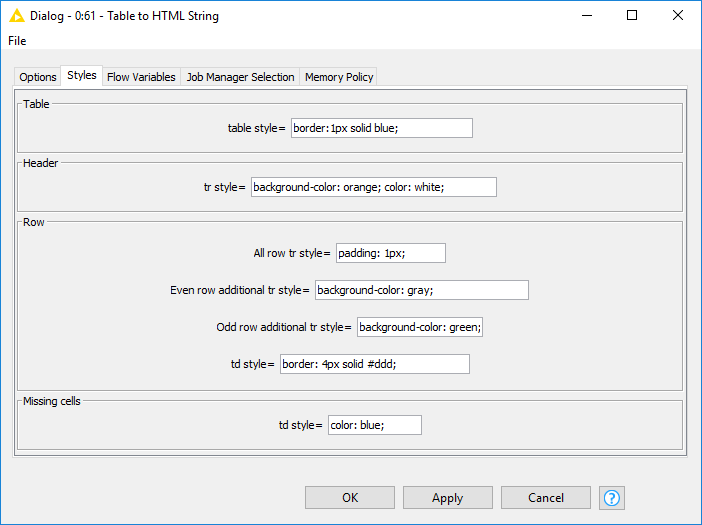 I’m also interested in being able to send emails so thanks for the JavaSnippet tips and hopefully it works natively in KNIME in the future.

Yes styling really helps but sadly still on older KNIME version on the server so can’t use it yet.

How old it should be available from 3.7 as off the last half an hour?

3.6-based but doesn’t change much as I can’t just install updates anyway. It’s IT managed.

Ah that’s a shame. But thank you very much for your work and Java Snippet. I’ve been able to use it and adapt the snippet along with the Table to HTML String node to create a KNIME 4.1 component (probably works in KNIME v3.x as a wrapped meta node). 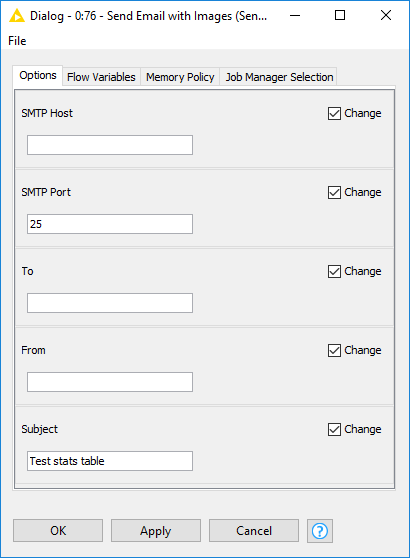 This feeds into your Java snippet and will send an email that outlook renders like this (presumably Gmail will to - it does based on my forwarded email): 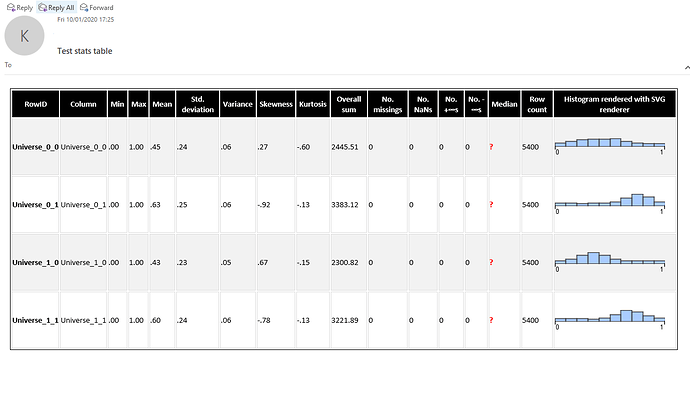