We’ve looked through the logs and cannot seem to identify a specific reason why this is happening. Just that it happens on the same workflow about once a week. I’m wondering if the ‘Connection timeout’ in the node configuration may play a role, or if we need to serialize the two processes instead of running them in parallel. I’ve run a basic test by creating two table reader nodes in a generic workflow and have them read the same table, starting each at various intervals apart to see if I could create a conflict, but the only result seems to be the second node takes a few seconds longer to complete than the first.

Any help would be appreciated.

As it is stated in the node description the mentioned Connect timeout could be triggered by parallel execution of bigger tables:
Connect timeout (ms)
Timeout in milliseconds for connecting and reading remote resources (in case of reading from a remote location). 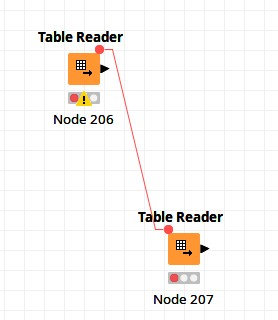 Please check out if this helps you. The other possible way would be to raise the timeout.

Thank you Michael. I’ve passed your suggestion on to the workflow developer who will be testing soon. I will respond with the result. It might take a while to determine if the issue is resolved since it seems to be an intermittent issue.