Trouble with multiple rules in a Rule-Based Row Filter node

A couple of weeks ago, I have experimented some troubles with the Rule-Based Row Filter node. Previously, I used to establish many rules in the configuration of a node, but now it doesn’t work and I don’t know why. I have had to formulate as many nodes as rules I need.

Do you have any idea what’s happening? I thought it was a problem of the Knime version so I upgrated it, but the problem still remains. 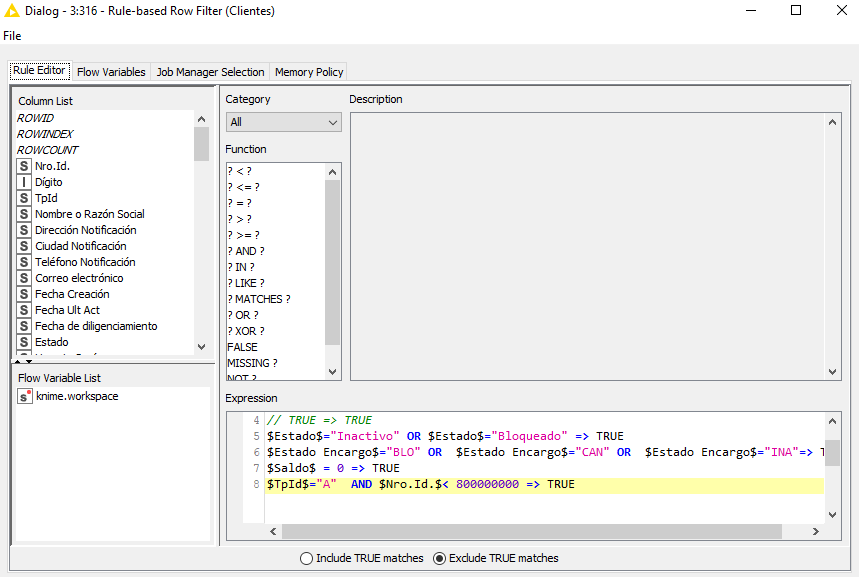 Otherwise, please use a -Rule Base Splitter- node and add at the end of the rules the following last rule:

Still doesn’t work, for any strange reason the node takes only the first rule, it omits the second one. It’s pretty weird because as I said it used to work fine before. 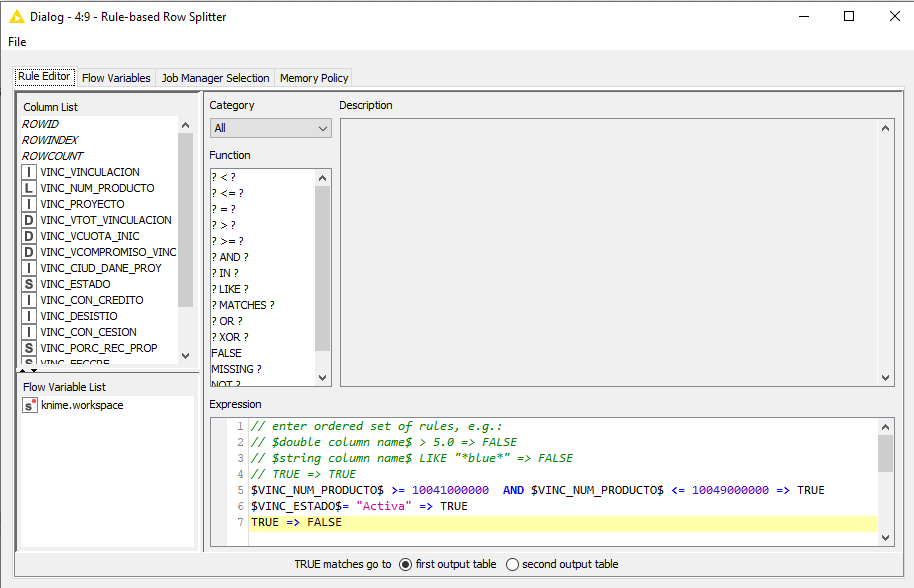 The syntax sounds now correct to me.
Unfortunately, I cannot test without your data or workflow.

Just in case this could be the reason, could you please add parenthesis in your 1st rule to make sure what is the operations priority ?
For instance, write:

Hope it is clear what I say. I’m writing from my mobile phone so not easy to answer.

@odiaz2309 like @aworker suggested: could you provide s basic workflow with maybe anonymized data where these rules fail.

Just to be sure: the Rule Engine would test the first line and assign the value and would then ignore all the other rules for that line, then the second one and so on. While this is fast an straightforward it might be confusing if you want to do more complicated if-then-else rules (which of course is also possible but might need other nodes - Column Expressions – KNIME Community Hub).

You also want to make sure there are no white spaces or other weired characters in the ESTADO column.

Thanks for the support, @mlauber71 but it seems like there’s a change with the way you can fomulate the expression, and the solution was the one that @aworker gave me but yours is valid as well.

At the end I joined the two conditions by an “AND” and it worked. It’s a shame because I consider more organized and understandable to write a condition per line.

I checked it but there weren’t spaces. Thanks