I just deployed a workflow to the server, it was running without problems locally.
But when I open it from the server I get this: 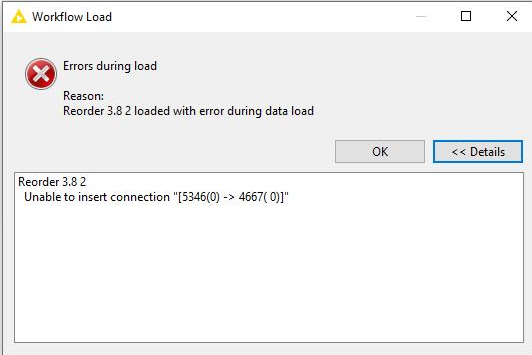 Essentially it means, the two nodes are not connected anymore; and I can’t reconnect them.

It’s not the first time it happens. Last time I “just” rebuild everything behind the broken connection; this time it would take ages to do that.

What’s going on? Why does it break my worklflows?
That just cannot happen!

Downloading, fixing, saving under different name, deploy again - does not help.
Fixing the connection even as a local workflow does not help when opening again.

Latest server version etc. (everything else is running smoothly, no problems)

Have you tried to use the Remote Workflow Editor (need to install additional extension) to see exactly what two nodes are not connected?

I am an admin, so I can just open the workflow itself.

I did see which are not connected - and now it’s getting strange…
At first it was a connection between two metanodes, then I worked around that and used something else aka rebuild that part of the workflow, then I deployed it again and opened it on the server.
This time I had a broken connection again, but in a totally different place, between a column filter and column rename node.
Same game again…then the connection was missing between a math node and row filter.

Then I gave up.

I had an older version of the workflow that worked and build on that one…now I should be where I was yesterday evening, after a pretty short (or long) night.

I am closing this ticket as we will continue investigating this issue with the customer via our internal support.