অস্ট্রেলিয়া is apparently the Bengali translation of Australia. If you pasted this text into the table creator it can not be rendered by KNIME even though the underlying data is retained. This text is visible in other places on my local system including several text editors. This is a bit distracting as I would like to be able to visually confirm that this data is at least present and appears to be correct (not that I can read Bengali of course).

Edit: Adding an actual question: are there any eclipse settings that can be used to get the text to render properly or is this an issue internal to KNIME?

What version of KNIME on which OS are you using? This appears to work fine for me under macOS 10.13 :- / 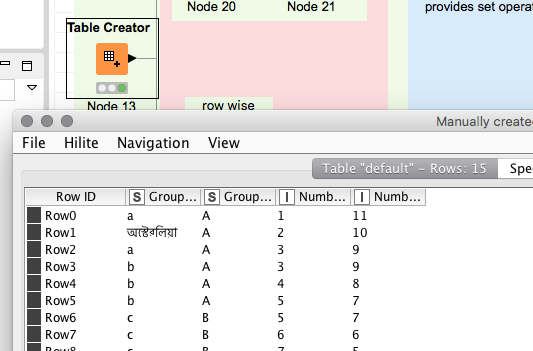 You could try adding the following line to your knime.ini file found in the program directory (in case someone stumbles across this in the future)

Also, thanks for checking!

I thought that might work as well but no dice. There are a lot of font preferences in eclipse, I wonder if any of them are used in the KNIME table output renderer?

You could try to set different encodings under the preferences. Maybe that could help.

Why does the xpath node get incorrect data in the Indian language? KNIME Analytics Platform

I changed the HTML parsing and retrieving part to some Palladian nodes and used your XPath definition and now it might work (although I cannot read the words). Maybe you want to check if this is what you need. Make sure you use UTF-8 as encoding. [image] [image] [image] [image] [image] kn_example_xpath_indian_words.knwf (198.0 KB)

Hrm, I thought that’s how we resolved the issue when we were having a similar problem reading UTF-8 strings out of a database.

I’ll double check that’s the property we set with my colleague tomorrow.

Did you re-read in the content after you’d made the change (not that I think that would necessarily be required).

Yeah, I double checked the setting was in my .ini file and confirmed the setting from the “About KNIME” > “Configuration” window. I tried re-executing everything to no avail as well. I followed mlauber71’s link (thanks btw) but had already tried that and to me it seems like these settings are specifically for files. I just would like to display the data correctly. Files are not a problem for us. The fact that it works by default on Mac seems like a good hint. Either something in java or related to system fonts maybe?

Does anyone know how to change table fonts in KNIME?

I can reproduce the problem on a Windows 7 machine. The view in KNIME does not show Bengali letters although it can display Hindi letters. The processing does work in both cases in files, when I write it into a workflow description.

Also the exports into Excel and CSV (UTF-16 - UTF-8 not tested) does work as expected. It seems to be a display problem within KNIME data on Windows (7). On MacOS it seems to be OK but I will have another look later.

Maybe someone with a Linux machine can check the examples. 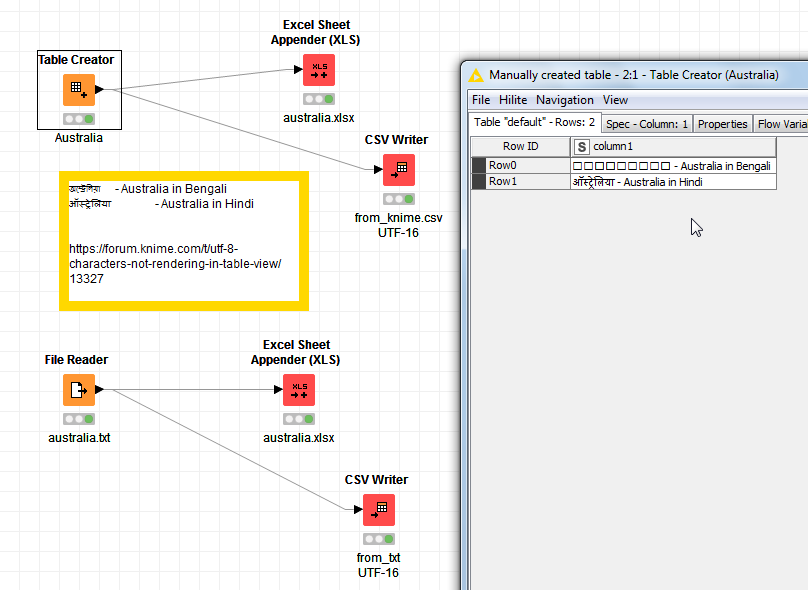 On Windows 10 I see same squares if past example text in the Table Creator field.