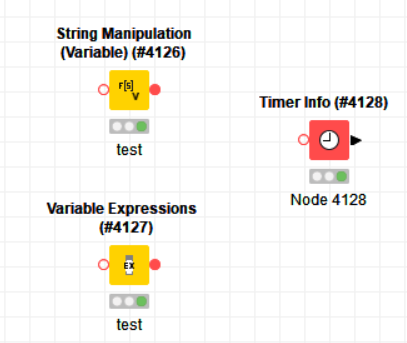 Expression in both nodes: string(“Test”)

In a normal workflow without any loop this shouldn’t be a problem. But a time sensitive production workflow with loops around the node (our case), this is a big problem.

Is there any easy explanation for this time consumption? We are currently solved this issue by replacing Variable Expressions node with String Manipulation (Variable) node. If we know the reason(s) begind this, this will help us to design our workflow more efficiently.

would say same reason as here:

Is there any reason (function) why you are using Variable Expressions and not String Manipulation (Variable) node?

Thanks for the reply.
No particular reason. Developer simply used the first node came to mind. And column expression is really powerful and multipurpose in comparison.

I see. Then I would simply use String Manipulation and/or Rule Engine Variable nodes.