I have an R Snippet where I am using minpack to fit a curve for each row of the table. x and y values for each prediction are in 2 list columns, which after a bit of fiddling I figured I can use as follows:

There are two issues here:

Of course, having posted the question, I have a partial answer, based loosely on the answer to a similar question on StackOverflow -

(That’s a bit unintuitive, but it makes sense with R’s vector recycling that the list has to be re-wrapped in another list of one member - the list of interest)

However, this again runs into the untyped collection column in the output table problem:

And indeed UnGroup-ing the column shows that KNIME doesn’t know what’s in the collection:

The only way I can see to fix is to add an index column, ungroup, correct the type of yPred to Double, and then regroup on the index, which feels somewhat cumbersome, or to pass through a Java Snippet, with the input yPred set as Array of String (toString()), and the snippet:

Is there a better way?

@s.roughley maybe you could amend your example with a working dataset so one might be able to test it.

Sure. Here’s a simple toy example fitting several rows to their own y = mx + c simple straight lines, which hopefully shows all the issues described (and the partial solutions / workarounds in case anyone else is in the same or similar situation with handling collection columns in the R snippet and related nodes)

@s.roughley well indeed a strange thing this loss of type.

I found one thing that would preserve the type if you save the data from within the R node as a parquet file and then read it back (it works on a Mac at least). Not the most elegant way. 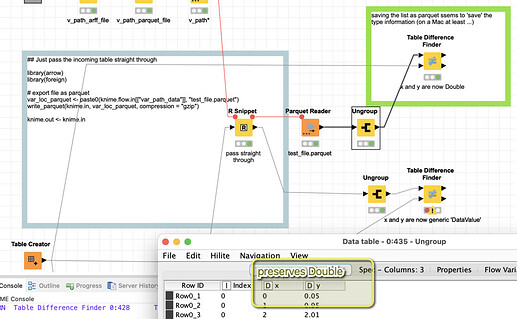 Thanks @mlauber71
I guess for complicated tables then that would work better than my hack which would need to be applied for every collection column output.

I did wonder whether changing to the columnar storage which is based on Apache Parquet would work based on your answer, but it looks like it doesn’t! I guess that means that there is something about the way R and KNIME transfer the data between themselves which write-parquet bypasses…

I tried to experiment with the two data transfer methods from the R snippet but to no avail. I checked the parquet file from within R(Studio) and it seems all the list elements in the parquet file are seen as double (the code is in the /data/ subfolder). I have no idea what is the difference.

I also tried to use ARFF but it would not work with these lists.