Can I create a workflow via a programme?

Hello, everyone!
The primary goal of my master dissertation is to develop a guidance application for users who want to build a workflow on the KNIME platform. This guidance application should be intelligent and flexible to give users advice during the building process. I’ve checked the feature of Workflow Coach, but the guidance degree it can provide is not enough.
Then I want to have a look at the *.knwf file. This file is a compressed file that contains all the detail with respect to the corresponding workflow. Basically, it contains the following content. 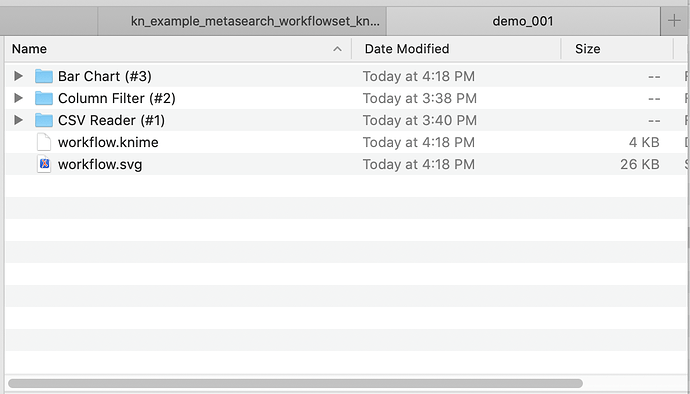 image1192×682 77.2 KB
My dissertation supervisor told me I can use data profiling method to analyse the dataset and find the patterns among this dataset. I find this guided exploration example is quite useful and I want to build this workflow via Python programme. My intentional scenario about this guidance application is after user uploaded their dataset, this Python programme will using data profiling methods to compute and analysis the feature of this dataset(e.g. find the most uniform histogram, most skewed histogram, most correlated columns), then generate a *.knwf file so users can simply import this file into KNIME to visualise the whole workflow. It would be better if the user could execute the new generated workflow to visualise the data and interact with those nice charts.
mlauber71 May 25, 2021, 9:39pm #2

IBM SPSS Modeler (aka “Clementine”) has (had?) such a meta script language to create a graphical workflow (I used a previous version back in the days). But without the automatic suggestions.

Not wanting to discourage you but you might want to check if this project is doable at all.

Thanks for your comment, it’s not easy work. I try to search for many resources that could give me a few hints but I failed. Your feedback let me know how big this project is and obviously, I cannot accomplish it within a month. But I’ll stick around in this plan for a while if someone’s comment could inspire me a lot.

You might aim for something like a technology demonstration where you create a simple workflow from a collection of nodes and create connections between them. Then you would discuss what are the challenges and present that as a:

That might be suitable for a masters degree. And also it might be interesting to see if you could create such a system with KNIME itself

As further inspiration I created a meta search using the XML files of KNIME:

A colleague of mine came up with maybe a similar question and we developed some super dirty approach that might give you an idea where to look. Since all things KNIME are stored in XML files we thought we might as well import them and search for a specific term. I constructed this scenario. I have my XML search meta workflow and a workflow in a subfolder (you might use any folder you like). I want to know where someone used the term “cryptic_xy_name” somewhere in the folder/workflow. [image] …

I built another approach specifically to address this question. You could browse your workflows and locate the workflowset.meta XML file of each workflow and e…

The other example would be a backup strategy that would use an outside tool to handle KNIME workflows:

@zedleb I created and example where the KNIME workflow (or workflow group) is being zipped into a file with a current timestamp. And can later be restored to a (separate) folder. [image] [image] This restore can either be automated also or you could do it manually if you need it. [image] [image] Please note you will have to configure the Path variables and workflow names to your needs. I use local paths that will be created dynamically.