Even if we don’t completely change the current node, it would be great to at least get a version of this node that processes in series. Here are just some of the benefits we would gain.

Less clutter - Dozens of Column Expressions in a workflow could be consolidated into a single node. I know that a user can consolidate multiple nodes into a Metanode or Component, but that only makes things worse by adding another level of difficulty when you need to find a specific expression and make alterations.

Better Organization - The ability to clearly see the expressions and their order in the calculation series in a single node configuration would make it infinitely easier to organize a workflow, quickly change order of operations and locate expressions in a workflow. We would then be able to combine a series of expressions into a single node and label them clearly for tracing.

Better Portability - A single nicely organized Column Expressions node that performs a series of processes could be instantly copied and pasted.

(The Formula tools in Alteryx operate in a series like this, and it really does make a dramatic improvement in workflow organization and user friendly formula tracing / adjustments.)

On the subject of Column Expressions, whilst I don’t use the node all that much, I see the ability to refer to an earlier row to be a significant step forward. However, as was highlighted in a recent forum thread, it is still not possible for a column that is being created to be self-referencing (i.e. refer to the value that it now holds on the previous row that has just been created).

This unfortunately makes the Column Expressions node incapable (as far as I can see) of performing cumulative calculations; something that it might otherwise be ideally suited for.

If not possible with the column() function then something like a “self” function which means the column being generated, with a relative row position would be good:
e.g 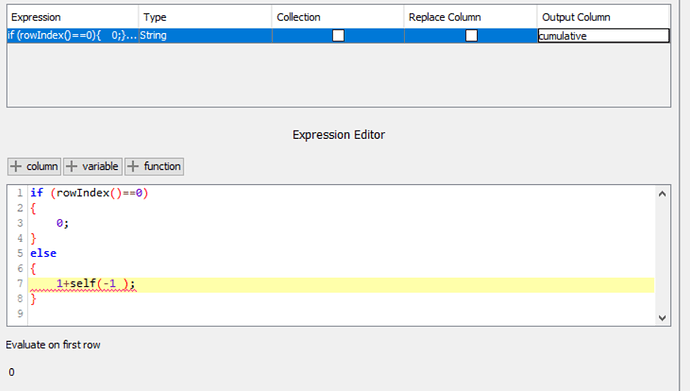 That addition would also be a nice feature in a future version, or in a new formula-style node.

This makes even more sense in Variable Expressions to have. I should be able to access the variables that are created/modified in expressions ordered above the current expression.

Back in the days when there was no Variable creator/editor nodes, I was creating my variables via the Variable Expressions node, and one common thing that I created was the full path of files. Since I wanted these to be configurable, I had a variable for file name which would be configurable, and a variable for base path, which could be configurable, and another variable that would be controlled by the workflow which would be the full path, being a join of base path and filename. But I could never create the full path in the same node as the values of filename and base path were not accessible within the same node via another expression. I had to add another Variable Expressions since I could access the values only after the first Variable Expressions had executed.

The ability to see the example formula output where we select the formula ordering would be crucial as well. I would also like the ability to manually enter alternate row numbers to use for all of the example calculations instead of always just seeing the 1st row. This would massively help when tracing back the impact of formulas on certain target values.

Another layout change that it would like to see is to just have the entry/viewing area for each expression in the same place as where you order the list similar to the Alteryx layout. You can include a minimize / maximize toggle to help reduce the need for scrolling. The current layout where the lists ordering is separate from the entry area would be less convenient for viewing and adjusting a series of formulas. I would also like an up and down arrow (with a keyboard shortcut) right there next to the entry area for easy ordering changes.

It would also be nice to access new columns / variables created previously in the series to be used in subsequent expressions.

Don’t forget the ability to copy and paste or duplicate existing expressions! It drives me crazy when this isn’t available in a UI. Duplicating (or Copy /Paste) of an entire existing expression / settings saves so much time. I would much rather duplicate and then alter an existing working formula then always have to work from scratch and run the risk of wasted time searching for a missing a parentheses somewhere. This is especially helpful for longer if statements or nested statements. The ability to copy and paste the formulas themselves would be a minimum.

I would also love to have universal access to save and access our own custom user formulas across every “expressions” node. That would allow us to name / organize formulas and easily drop in example formulas that we could alter. This would be especially helpful for complex Regex formulas which are a slow trial and error process for many users.

In fact, it would allow us to build our own little solutions warehouse and save working examples from other shared solutions on the forum for easy access within KNIME.

The ability to reference “self” and “current column” in an expression would be an awesome way to make expressions more portable and universal.