Complete view on data and variables

With the grow of a workflow complexity, I often find myself struggling to keep track of a specific data (meaning a specific column in a table) or a flow variable: where it was generated, in which nodes plays some role, what type it is, etc… This is even more frustrating if I am reviewing or modifying some old wordlfow.

Is there any way, like some tool or a view, which shows a list of all the data and variables active in the workflow?

…I recognize it definetly would help some “good practice” during the very first implementation of a new workflow (btw, is there any page with some suggestion?), but it still would be a good tool, in my humble opinion.

Thanks for any contribute!

Is there any way, like some tool or a view, which shows a list of all the data and variables active in the workflow?

I’m not entire sure I understand what “active” means here. Do you mean what are still in use?

As far as variables are concerned, they remain “active” all the way from the moment they are created. There is currently no way to remove a variable (this has been discussed a few times and it’s being looked into) like you would remove a column via the Column Filter. So you can see all the variables if you check the Flow Variables of the last node.

As for columns, of course they would vary, depending on if you removed or added columns, but you can always see what columns are being in use at any node by looking at the output of the node.

With proper design, documentation and naming convention, it’s usually not a big deal to understand what was created and where.

I would agree, though, that it would be helpful to have a tool for tracking. The usefulness of the tool for me would be track when did a column change type - this usually happens when a operation would replace an existing column. It would be great to get some change log of the columns and variables.

My bad, wrong choice of wording from me: that “active” just means “existing”, so “all” the data (again, the “column”) and the flow variable exisiting in the workflow.
For the rest, you perfectly understood what I was pointing at.

I am imaging something like a little window or a panel with a view similar to the flow variable panel in each node output. Each row would be a variable or a column, then the info like “owner ID”, “name”, maybe the type (but an icon would suffice I believe), maybe an editable “note” field … it would be cool if on double-click on a specific row, all the nodes involved with that variable are selected (similar to what happen when you “Select scope” of a node in a loop. If a specific row points to something that changes type somwhere, there would just be a duplicate, and the owner ID would hel destinguish between them.

In the node output window there’s a tab with Flow Variables that shows the “owner” (creator) of each variable.
It’s not global, you can only see the Flow Variables of that node. Maybe that helps.

It sounds like the Workflow Summary feature might be helpful for you. There are some interesting components and workflows on the Hub that make use of it as well.

Hi @Thyme! yes that’s the one I was talking about, which gave me the idea. A global version of that would be great!

Thanks @ScottF! That’s definitely a good starting point. I found the Interactive Workflow Metadata exploration workflow which is able to process the XML exported in some more readeble table. I managed to extrapolate a list of the columns adding with few blocks. Still lacking the variables, which seems more tricky, but again, a great starting point to achieve what I was imaging! 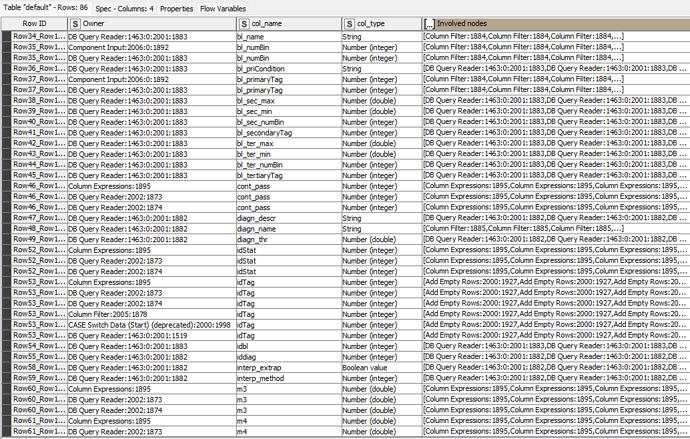