I have a dataframe with hundreads of columns.
Just for example purposes I’m going to present a toy dataframe.

I want to compute the mean for those variables with the same initial substrings as name (TPT_A, TPT_B…) that end with 2 and 4.
So I would get something like:

In R you would get this data like this:

at first I had something in mind that could be descriped as grouped unpivoting, but since the example dataset has only one row, my solution is a lot simpler. 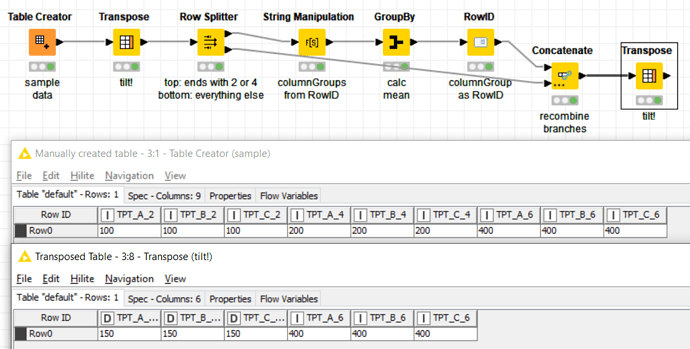 First, thank you very much for your answer.
Could you please provide some insights on the grouped unpivoting solution? As I said, this was a toy example, and the real datas has many rows.

It’s funny that you ask, after posting I had this idea on how to generalise my solution and I went to the “kitchen” right away. Here it is:

This is not what I had in mind, however. Story thyme:
While reading your question, I had this spark in my head: Group Loop Start. Except that it groups rows, not columns. I would have to emulate that behaviour, so the obvious way was to extract the column names, boil it down to the groups, and use a Table Row to Variable Loop Start instead.
Then I could filter the table to one group with that variable.
Not sure how I’d have continued then. I wasn’t even aware of the postfix filter or the 1-row shortcut at that moment.
It might be useful though. Now I know the logical thing would be the unpivot node, but that guy doesn’t even need the Group Columns Loop mechanism. 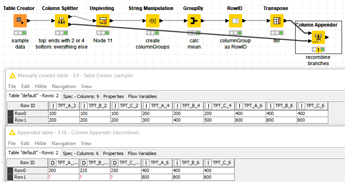 For people in the future, who want to know how my “Column Group Loop Start” looks like, I actually had to implement one in another question:

Yeah, the idea was clear. Two days ago we had a question were what looked like a mistake was actually intended because the algorithm was more complex, so I was making sure

Here’s the workflow with the Column Group Loop mechanism . I changed the end a little bit to keep the ID column. If the column renaming and resorting doesn’t work with the actual table, you could also: Rename them directly after the Loop End Extract the column names Get Var number and time from them, then sor…