Any help would be much appreciated

it is quite easy to achieve with two nested loops and the use of flow variables. See the attached workflow.

Fantastic, thank you Marco for such a quick and useful response!

Alternatively a Java snippet with the following code would produce collection columns, which could then be split by the UngroupBy node:

I know Java snippets aren't very KNIMEy, but why use 7 nodes when you can get away with 2? :)

Or use the one to many node from the data generation plugins. It does exactly this.

Hello @marco_ghislanzoni,
The workflow has been realy helpful. I am also trying to achieve the same results.
But in a row the iteration count value is 0. The counting loop stops there and throws an error message
" cannot loop fewer than once"
and doesn’t iterate to the next row.
Can you help me with this
[ example dataset: 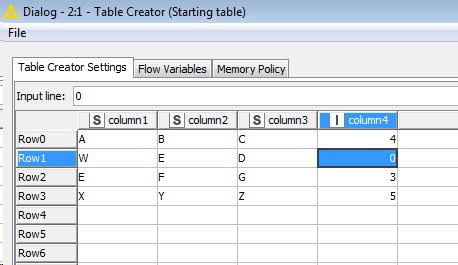 If the count associated with a particular row is zero, then there’s nothing to loop over - so maybe just filter out those records beforehand? 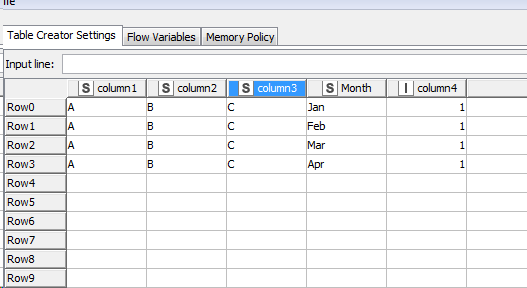 If you are using the existing workflow provided above, you can modify it by adding a couple of nodes between the 2 Loop End nodes: 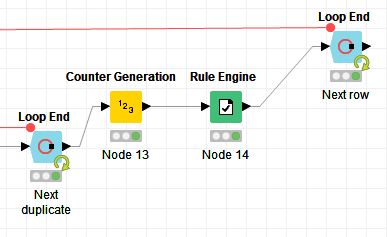 Within the Rule Engine is just a primitive way to assign abbreviated month strings based on the counter:

There’s probably a better way to do this, but it works!

Hello @ScottF,
Thanks for the solution.
I need to produce the following months . If i running the WF today, the next rows have the values
May
June
July

In that case, you probably just need a flow variable corresponding to the current month, which you can then pass into the Counter Generation node as a starting point.

Such a flow variable could be generated using the Date&Time Input node to get the current date, and then parsing out the month.

@rsherhod an you give an example for this method please

there is node for multiplying row based on value in that same table - One Row to Many. Would that work for you?

Thanks so much for posting this! This was also exactly what I needed!