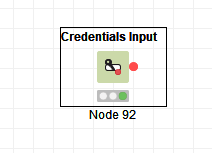 Later in the workflow i need the UserName to filter a table.
How can i extract this information from the variable ?

We have an internal node at @Vernalis which will do exactly this:

According to our node description “This node extracts the username from a selected workflow credentials variable.” The user name from the selected credentials is returned as a new flow variable.

Would you like me to see if I can get it released publically?

Hello Steve,
I have now solved the problem not quite elegantly and ask the user again for his username with an input widget.
So there is no rush.
I don’t want to generate any effort now.
Greetings Tim

OK - Thanks @Tim8200. I will see whether I can get it out with the next update I do, which hopefully will be in the next week.