Hi Everyone, I am very new to knime and still learning and I am having trouble figuring out how to subtract a set of columns from another set of columns in a simple fashion. For my workflow, I generate a z score for all the columns in my csv and I would like to divide the z score columns from their corresponding value. The z-score columns have the exact same name as the actual value columns except they have .z-score added to the end. I was just wondering if there was a simple way to do this, as I would not like to use any type of java snippet. Any help or advice would be greatly appreciated.

Have you tried to filter the columns using wildcard in “Column Filter” node?
In your case you can use a pattern like this to include the z score columns:
*z-score

While I could do this, I am sort of confused as to how this helps with my issue. Could you elaborate more on why I want to filter the columns? My main issue is dividing the actual value columns by the z-score columns. I think I could use the math formula multi-column node, however, I would need to manually input the division for every column.

Assuming everything (values and z-scores) are now in one table:

I thought you want to filter the columns and keep the z-score ones. Sorry for my misunderstanding.

Here I have attached an example workflow in which I have a few columns and then I loop over the actual columns (the columns without “z-score” in the name) by using this regex pattern in the configuration window of the column list loop start node:
((?!z-score$).)*
Then in a math formula I divide each column to its corresponding z-score column using a formula produced in the first string manipulation (variable) node and the result column name is produced in the 2nd one (you can replace the actual column by checking the option in node configuration and using the current column name in flow variables tab). Finally I have filtered the other columns using a wildcard pattern produced in 3rd string manipulation (variable) node. 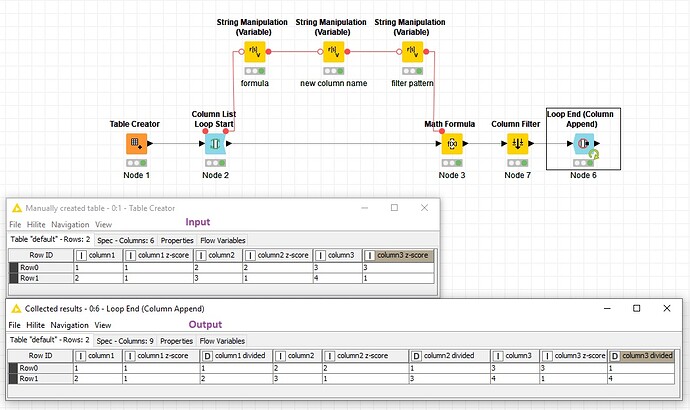 The point of unpivoting in my suggestion was to reorganize the table so that you only have one column to deal with in the Math node.

It seems new function needs to be added to Math Formula Multiple Columns- say, COL_Ref(n) which returns value from column with number of Current +n.

This is exactly what I needed, thank you!