hello everyone im new user in knime, in one column i have values negative and positive, the achivement is clear that values that sums up to zero, an example like this :
-10
10
5
8
-7
-3
10
i have found the way to solve it only with the values that are exactly the same like in the two first columns, but if you realized the three last rows sums it will be zero, could you help me.

Not sure I understand. What is the desired output from above input?

In the groups are some numbers than can be sum and automaticalli are eliminate, but i want to mantain the others, in the example that occurs with the group “D and E”.

Would the numbers that per group (A, B,C,D) would add up to 0 always occur in a row or can they just be mixed up and the system would have to sort the ones out that can sum up to 0.

In fact they just be mixed up and the system have to sort the ones out that can sum up to 0.

Hi @Angel_Villa and welcome to the Knime Community.

The sample data you provided is a bit too simple and does not cover different scenarios, so it’s hard to know what to implement.

For example, see the following data: 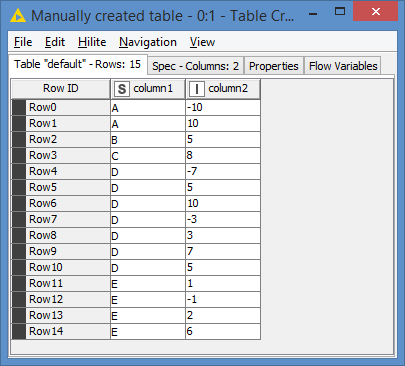 If you look at the values for D:
We have the same values as per your original data, I just switched some value around, but I also introduced 2 additional rows for D, with values 5 and 7.

All 3 combinations give 0. How do we choose which combination should be used? Or does it matter which one to choose?

Also in your example, the “counter” value was right before or after the negative value(s), that is why I shuffled around my values. Are the counter values always supposed to be around the negative values (and hence that’s how we would choose which combination to use), or they could be all over the place like in my sample?

In this case, there aren’t the proper counter values, you will end up with:
D -7
D 5

It does not matter the combination, but always it belong to the same group (example D,E) and exists into the group only one exact combination to sum up zero, and yes always has the “counter” values, the target is to eliminate the negatives. 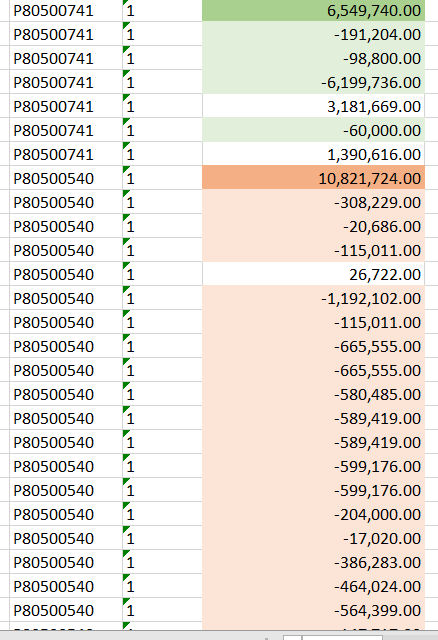 under assumption that in one group all negative numbers must sum up to one value this simple workflow should do the trick: 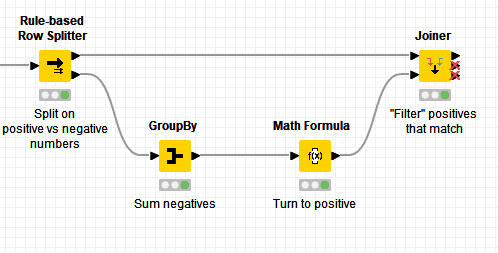 If above assumption is wrong then attached workflow is no good. In that case can you modify input data in it so we can see other possible cases?

Hi @ipazin , I think your solution is incomplete… The matching of the sum of the negatives do not necessarily match to 1 positive only. In some cases, it could need combinations of positives, which is the tricky part. For example, -7-3 could need to match with 5+5. So that means you can’t join directly to the results of the positives, but rather to a combination of them.

EDIT: At least that is what I understood when I asked about it. If @Angel_Villa can confirm that the sums of the negatives would match to only 1 positive, that would be a much easier solution - it would basically be what you provided.

just wanted to cover basic case which satisfies given examples (no case where “-7-3 could need to match with 5+5” in them) cause anything else seems complicated at first and perhaps not necessary. Also if not mistaken this is financial data where e.g. positive numbers are budgets while negative numbers are actuals and if what you say is possible then there is no way to resolve 5 5 5 -5 -5. Or at least no way without additional information. What I’m saying there must be a logic behind these numbers and not all combinations are possible. Are you maybe a mathematician?

Hi @ipazin , I actually do have a degree in Mathematics

But you don’t need to be a mathematician for what we are dealing with here. You learn this when you’re like 8-10 years old

Hopefully that is also clear for everyone, especially @Angel_Villa

asked regarding Mathematics cause the way you think and not so related to this topic. Actually also have a degree in Mathematics

I guess what @ipazin was wondering here is whether you were a mathematician rather than an accountant, since this sounds an accountant problem. He was not questioning your mathematics lol

My two cents on mathematics : we are here again face to a non-well-posed problem, as in other occasions. In the case here, the solution exists but as @ipazin mentioned, it may not be unique. Thus, he has just suggested a possible “regularized solution” which adds a condition and constrains the solution to be unique.

Hopefully that is also clear for everyone, especially @Angel_Villa

… but he needs to clarify it.

PS: Btw this is definitely and inverse problem

Hi @ipazin @aworker , while we’re waiting for confirmation from @Angel_Villa , I thought that finding combinations for the positives was quite an interesting challenge.

So, I put something together for this - note, it will also work if no combination is needed, which basically is a combination of 1 item, so it will still work.

I made use of Python, since the Python script since I it has a library to generate all combinations of a given list.

Before going into details, here’s the results.
First, the input data: 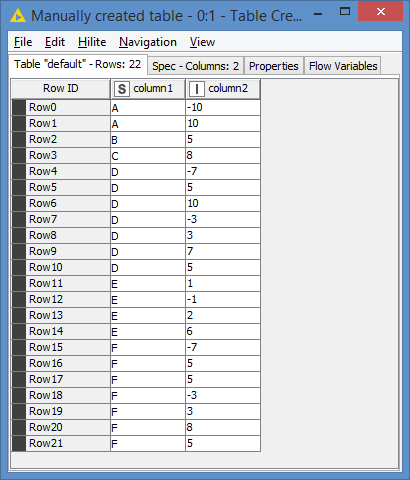 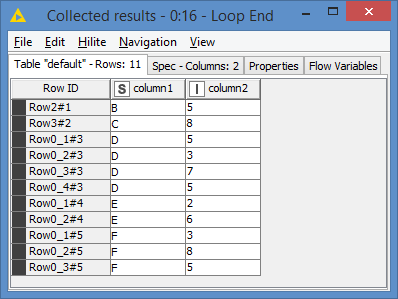 The difference between v1.0 and v1.1 relates to the case of F. When I built v1.0, the approach was that the Python script would retrieve the combinations for me, and then in Knime, I would exclude the rows whose values are in the combination. This works, however, the issue is that when you have the value more than once in the column, then you are in trouble.

The combination correctly returns [7,3]. However, when trying to exclude 7 and 3, it would actually exclude all rows with 7 and all rows with 3. I could not find a way in Knime to do a row filter but only on 1 occurrence.

As a result, I actually implemented the removal of the elements directly in Python, because the method list.remove() allows you to remove only 1 occurrence of it.

Of course, the best way to check that the workflow works is to check the sum of the original data and sum of the processed data (they should both be the same):

Here’s my workflow: Eliminate rows that sums up to zero.knwf (47.6 KB)

Thanks , your solution was so creative, it works well.

Using Python is like buying dough when doing pizza

lol @ipazin , I’m not a Python dev and indeed it’s a good analogy

But I can’t see any other way apart from using a script to accomplish the removal of only 1 instance of an element.

It was a good one @ipazin