When I am trying to add / aggregate small double values, I am getting discrepancies. Though this might be because how double datatype is stored.
However, 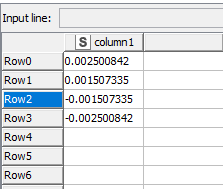 When I adding these values using groupby or math formula node

Instead of 0 I am getting vey small value 10^-19 which in normal cases is alright.

However, we are using a rule engine to flag values which are greater than 0 and using those values we are dividing it with another number.

But due to this we are getting very large numbers and getting wrong results.

This seems to me to be a limitation of the double-precision floating point number format. Trying to represent that many significant digits after a decimal point leads to a loss of information. Not every decimal number can be expressed exactly as a floating point number

I’m not sure that anything can be done about it besides maybe adding rounding step.

Hi @berserkersap , this indeed seems like it’s cause due to the limitation of the floating point precision as @elsamuel mentioned.

Depending on what you need the value for and what you are validating, to help with the precision, you can always multiply by something like 10000 or even 100000, or even 1000000. Most certainly you want to do the multiplication before the division.

Your rules might still be usable as is. The worst case would be you can just also multiply your rules by whatever you multiplied in the calculation.

When I tried this in table creator

The executed values are

I can see KNIME rounded of the value in row 0 . So it seems it will only take 16 digits and rest of them Zeroes.

Sum of the numbers

Sum of the numbers by calculator 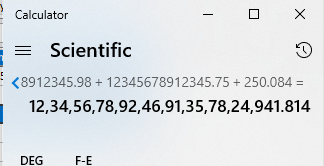 Well though I need to again check if this is feasible.
Now I have a doubt, how do people work with this, like when they need more accurate numbers (may be in medical, research, accounting and so on)

Are you able to take the logarithm of your data and use that? That is what most do in a situation where the data has a high dynamic range (e.g. decibels). The other alternative would be software packages such as Mathematica that have capabilities for high precision calculations.

Hello @DiaAzul ,
Thank you for the answer. I will try using logarithm but probably might not use it in the end.
I thought softwares like Mathematica are used for differentiation, integration that sort of mathematical functions . Will that also be suitable for this requirement ?

Mathematica is a symbolic and numerical computation programming language with an extensive library of capabilities. It introduced the notebook approach to programming (copied by Jupyter) and is a functional programming language, like Julia. The library of available functions is extensive and includes a wide range of statistics, machine learning and visualisation components amongst many others. The downside is that the language is not very readable, which makes development and debugging painful. It is also expensive (relative to other options such as R, Python and KNIME).

What you have described so far are the symptoms of your problem, not what you are trying to achieve. That is, the analysis you are doing is generating very large and small numbers, which is the symptom; the algorithm (what you are doing) is the cause. If you are able to share more about what it is you are trying to do and how you are going about doing it then the forum might have better suggestions. I appreciate this may not be possible if there are issues of confidentiality.

Hello @DiaAzul ,
When you speak of Mathematica, it is Wolfram Mathematica right ?
It is true that I cannot tell the requirements due to confidentiality.
But I can just say we have tabular data (few text columns, few columns with numeric data) , joins, group bys, multiplication, division, rule engines and we need accurate results.
I know this is pretty vague

@berserkersap , thanks for the extra information, that helps a little.

What you could do is store the numbers in KNIME as a string representation. This would preserve their accuracy whilst you performed you data joins and manipulations. When you reach the point that you need to perform a calculation you can pass the data (numbers as strings) into a Python node.

Within the Python node you can use the decimal library functions to perform exact mathematical calculations at the required precision. The library allows you to set the precision of the calculation to match your needs. You can then output from the Python node as either text representation of the number (to preserve precision) or as a Java decimal number (in which case rounding may occur).

If you use the Python (labs) node you can batch the processing if you have a lot of data. I am sure that you could figure out the best way to build this into your workflow.

Thanks @DiaAzul ,
Sounds like a plan. I will try and let you know.
However, when I tried this library in a online compiler, it is still not completely accurate.

Honestly, this is my first time working with python with KNIME and need to check the environment and all but I can take care from here

Hello @DiaAzul ,
Sorry to bother you again but do you know how to use group by and pivot in python node while maintaining the decimal data type (the accuracy)?

The first node uses Pandas groupby function to group the data into the 25 fruit-furniture combinations and sums the values.

The basic principles are:

The Python script for GroupBy is below.

The second node provides an example of pivoting the data. This follows a very similar pattern to the groupby example, with the exception that converting the decimal values back to strings is more difficult. In the groupby example there is only one value column. Therefore, when we apply the str(x) function it is applied to the value in that row, which is unique. However, if there is more than one column then pandas passes the entire row to the str() function which converts the values to decimal and concatenates the string. Therefore, when there is more than one column of data we need to first take each row in the data frame (iterate across the y axis) and then iterate across the values in that row (iterate across the x axis). This then generates a new table (string_data) with decimal values converted to strings.

The pivot_table example is below.

I hope that helps.
DiaAzul.

Thank you very very much @DiaAzul !, this is really helpful.

I wasn’t that proficient in python

From what I remember a long time ago from my numerical computation class:

Are you able to take the logarithm of your data and use that?

Are you able to take the logarithm of your data and use that?