I am trying to execute a logistic regression model with a binary response variable and 16 categorical variables with different levels and 1 numerical variable which is normalized. The data has 850,000 rows. I have only added the 17 variables which has given a proper model in the other software ®. I have checked that there in no missing values in the data. 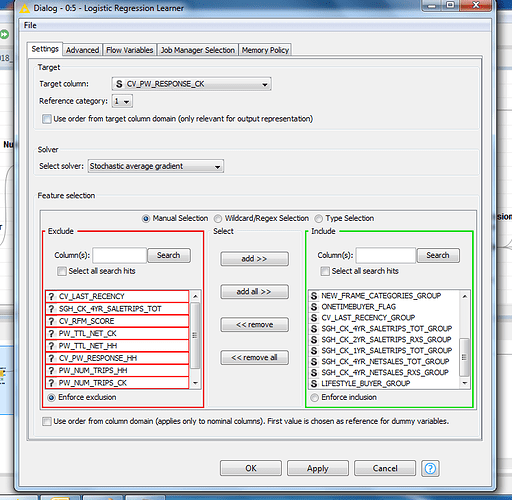 Error and warnings. The node executed till 91% and then failed with the following warnings and errors-
WARN Logistic Regression Learner 0:5 The covariance matrix could not be calculated because the observed fisher information matrix was singular. Did you properly normalize the numerical features?
ERROR Logistic Regression Learner 0:5 Execute failed: Cell count in row “Row1” is not equal to length of column names array: 6 vs. 3

There is just 1 numeric variable and it has been normalized. I am not sure how the error message can be decoded. Thanks a lot for the help.

as the warning states, the observed fisher information matrix is singular but unfortunately there are different scenarios that can lead to this degenerate case, each of which requires a different strategy to resolve:

Finally, may I ask which KNIME version you are using because the error you encountered should be fixed in current versions (3.5.3 and 3.6.0).