error when create a simple conditional statement in Python node

I am trying to figure out the basic usage of the Python script nodes.
I want to do a basic If Else condition and every time I do it, it fails.
There is no good information on how to use this node. Clearly you cant write python code in the normal way you would in other IDE’s.
please can someone advise on what I’m doing wrong?

my basic code is below (input consists of a few columns, one of which is ClientNo. All I want to do is if a field equals ‘T’ then add a word to a new column:

Well strictly speaking this is not a KNIME question but since we are at it (doing some more Python lately).

Here is a variant with a quick lambda function

Two more variants including a third condition is in the KNIME workflow: 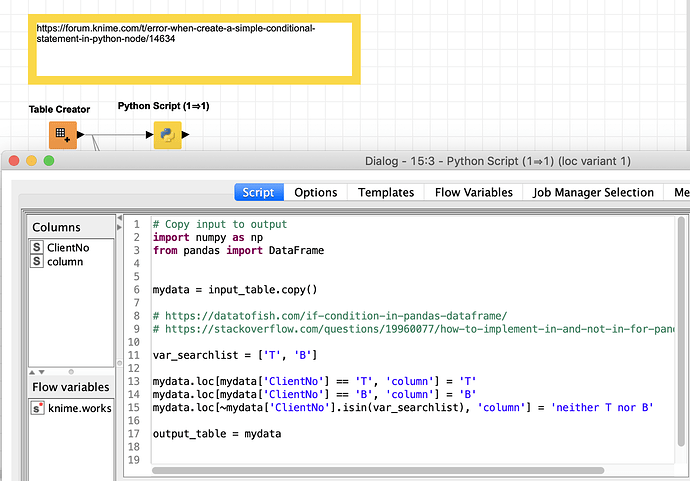 As an additional service since you might want to do more with KNIME and Python here is a basic example of the three main Python inputs and outputs between KNIME and Python, data (you already used that), graphics and prediction models (strictly speaking this pickle thing could also be done by simple Python node but it looks more KNIMEy that way

Question is what kind of output you would expect. KNIME and Python would typically have three generic outputs data manipulations etc using Python build prediction models and save them use graphic packages like seaborn and export graphics (as PNG) I modified an earlier example to show all three (if you just save results from Python you might use much more), and also there is the ability to integrate Jupyter notebooks in KNIME. [image] kn_example_python_logistic_regression_iris_graphic.knwf …

awesome! thank you so much.