Thank you in advance;-)

If you only have the molecular formulas, then you can try modifying this workflow to loop over all the common atoms and append the results as new columns

Count an Element in Molecule – knime

This workflow counts the number of atoms in a molecule for an element of choice. This is done in three steps: 1. The molecular formula is created. 2. The rows …

If you have chemical information (SMILES, SD file, etc), you can use a substructure counter node and SMARTS queries to do this.

Can you share the data you plan on using for this?

Thank you for a prompt response. Here is an example of the list that I might use it.

The file you shared already has these counts. What exactly are you trying to do?

Complementary to @elsamuel approach, please find below a possible solution based on regular expressions. It is generic and accepts any Atom from the periodic table. It can also handle salts or mixtures separated by “.” (or not) if this is a requirement: 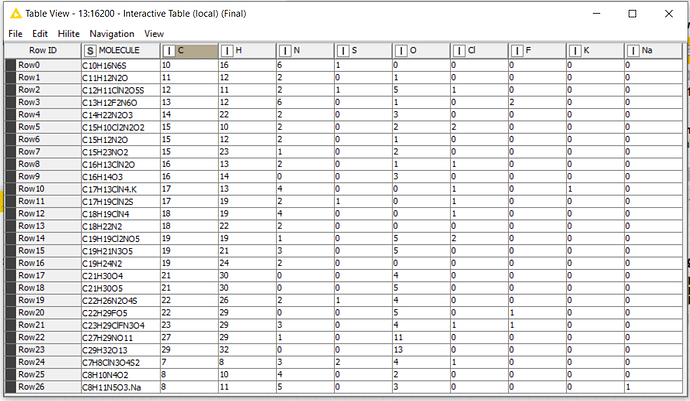 The only requirement for this to work is that the name of the column has to be “MOLECULE”.

Ps: I have not explained how it works, nor documented it. I’ll try to do it tomorrow for completeness

Sorry, this file contains these counts. However, I am going to use an in-house database and those counts are not included there due to the space limitation. This is going to be a part of the workflow that I am working on… Sorry for confusion.

@Amanda252 I think that any of the approaches here could work.

However, if your molecular formulas are not rigorously validated/cleaned then any RegEx-based solution will cause problems. For example, the file you shared has formulas such as C10F21CHCH2 and C10F21CH2CH2SO3H and C11F23CFCHCOOH which are hard to parse. Things like organic salts could also be problematic.

I’ll attempt the documentation, because I would have done exactly the same thing (and partly did, out of curiosity):

Thanks a lot @Thyme for completing with the regex explanations. Please feel free to improve the workflow too and to post it back.

I understand @elsamuel comments. Actually I didn’t start from @Amanda’s excel file but from a list of public smiles from which I calculated the INCHI codes and extracted the atoms with counts as in my molecule examples. I’ll provide tomorrow the little extra piece of workflow to make the algorithm robust to the failed examples but @Thyme already wisely solved it in his explanations (step 6)

@elsamuel @Thyme @aworker Thank you for a quick responses/comments/suggestions. I couldn’t use actual chemical information because for most of the data I have no information at all and that’s why RegEx-based solution works well for my purpose.

Ok, so I took a look again (it was late at my place as well), I found out that the different RegEx expression is actually necessary (+ the summation at the Pivot node). @Amanda252’s example has "-" in the molecular formulas, so those are removed as well. The rest is pretty much the same (1 String Manipulation node got split into 2, to reduce the neural RAM usage).

The sample input is now also processed and the results compared against the existing values. Ael’s solution with my modifications works, but there’re 2 molecules that have wrong values in the Excel file:

I should mention that this does not work with duplicate values (=molecular formulas)! To remedy this, a different ID column should be used as grouping column in the Pivot node (e.g. the column “name” in the excel file).

The workings are not changed, so I won’t explain that again (see above), but I can mention the general idea behind this: The molecular formulas need to be fragmented into its parts. This is done in two steps, both times with the cell splitter. The String Manipulation is used as helper node. All of this is done to bring the data into a format that the Pivot node understands.

Now starts the tl;dr part.
Table Validator (Reference):
I like to use it to resort columns by reference and insert missing columns. Can also check data types and optionally fail. Multi-node node that’s especially handy before a Table Difference Finder.
Table Difference Finder:
Compares two tables cell by cell. Any differences it finds will be in the first output. If it doesn’t find any, the output will be empty. It’s very literal though, so the RowID and ColumnNames have to match exactly, or you’ll get lots of unmatched cells. Most of the nodes in the lower branch prepare the tables so they look exactly the same. It’s a bit of a snob.
20220215 Pikairos Count Atoms Ocurrence in Formula - modified by Thyme.knwf (239.7 KB)

You were faster than me lol

Thanks a lot for your comments yesterday which improved a lot the behavior of the algorithm. I’m posting here my version that I modified in parallel to yours because it has other features too, for instance it shows how to start from SMILES or from IUPAC instead of from Molecular Formula. I’m eventually verifying and comparing the results starting from different sources too, so this maybe a plus too. I believe both versions are complementary.

It is a pity that there is not a KNIME web collaborative common space where we could share on-line a workflow to improve it interactively. Maybe in the future? This would be a super feature

Thanks again @Thyme for helping on this

Edit: I have updated the workflow since first time post to cope with presence of “-” in formulas

Ps: @Thyme, could you please reach out by email or LinkedIn ? Sorry to use this post to ask but I do not know other way to getting in touch. Thanks

Oh, that collaborative common space exists, it’s called KNIME Server. The KNIME folks just have to provide one to the forum users

@aworker I reached out via mail. If my detective skills failed and it doesn’t reach you, I can also use the contact form.

Oh, that collaborative common space exists, it’s called KNIME Server. The KNIME folks just have to provide one to the forum users

Indeed, it would be nice if with the new upcoming KNIME versions based on a fully implemented web interface, a kind of collaborative web server space is added too