I am searching for something similar as in the post:

I want to do feature selection and at the same time make use of prior feature selection results. I got a table with previously excluded features as column headers. I tried to group them and convert them into a variable: 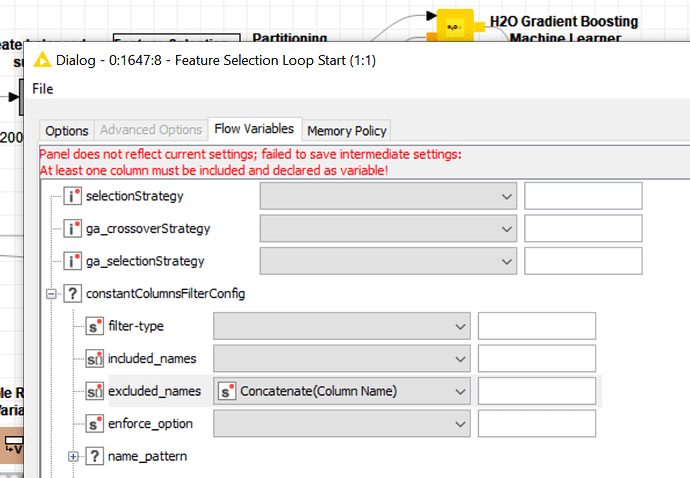 but that didn’t work. Maybe because (the symbols indicate it) the variable datatype does not match.

Right now I solved it by using a reference column filter and just input those filtered columns into the features selection, but as far I understood it correctly, those are two different things.

All the ‘excludes’ in the feature selection loop are static features, in terms of they are used for every feature selection, but not permuted. (This is what I want).
All filtered elements are not used at all (not even seen as static features), therefor any correlation which comes just with the combination of those static variables does not show up in my model.

Do you have any ideas on how to fix this?
Thanks a lot!

changing from Concatenate to List aggregation method in GroupBy node you will get array flow variable with Table Row to Variable node which can be used to control excluded_names option.

Hi @ipazin,
thanks a lot. This actually worked so that i can use it in the feature selection.
Sadly the option via the flow variables is not what i actually wanted. I want to use those variables as static columns, instead they are actually excluded:

Can someone help me with that?

Also sadly I found out that the list of variables doesn’t do anything to my feature selection. So excluding doesn’t work too

I gave it a shot and although I managed to do it, controlling this dialog with flow variables is a bit tricky. So I suggest a workaround using Wildcard/Regex Selection option in Feature Selection node. For it to work you can rename all columns that you want to be static by adding for example _Static suffix to them. This can be done easily using Column Rename (Regex) node. Can you give it a try?