I am using the default setup for a LOO Cross Validation where I feed my training data to the X-Partitioner and it passes the data with one data point left out to a Linear Regression Learner Node. As far as I understand, upon each iteration, it trains my model with the partitioned data, does the prediction in the Predictor Node, passes the current result to the X-Aggregator and that appends the RMSE value for the current iteration to the error table output of the X-Aggregator node. The problem is that the RMSE is the only thing that is aggregated and not the parameter which I actually want, which is r^2.

Is there a general way to make the X-Aggregator accumulate any calculated parameter I want? How can I achieve this, since as it stands the only thing I aggregate are the RMSE values, which aren’t very useful to me. Is there such a thing as a general Accumulator Node? Imagine putting a node after the Predictor Node, that calculates r^2 and plugging that into a “Accumulator Node” which only serves to accumulate r^2 values for every iteration of the cross-validation. 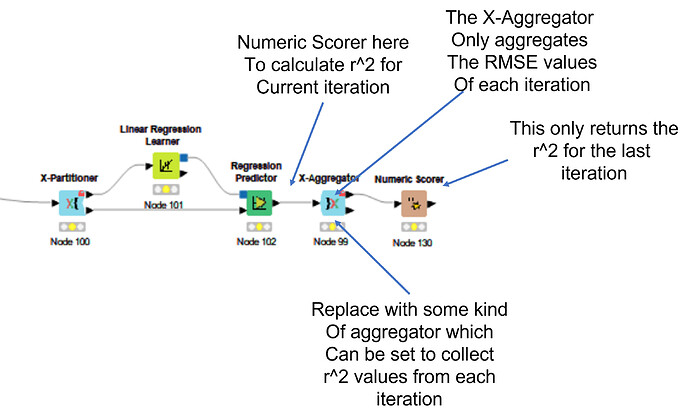 As far as I’m aware, if you’re doing Leave One Out Cross Validation, the test set is only going to contain 1 record, and having an R^2 of one value makes no sense.