So after much trial and error and having some good fun with Knime, i’m pleased to announce i have released to hub a component that resolves 3 key pain points of the Google Analytics Query node.

If you have been using the Google Analytics Query node and have a good browse through the forum there are 3 pain points which emerge regularly.

The Google Analytics Query - 120Feet Edition resolves all of the above. Here’s what i did;

Nested Loops for the win

There a number of way that this could be done, ultimately i landed on wrapping the node in a try-catch recursive loop. This is the innermost loop.

As i’m feeding the original stream into the 2nd input of the catch, the re-try logic looks checks if the column containing one of the query parameters is populated. If not it means the query succeed and feeds to the recursive loop top input. If it failed, it will come out of the bottom and feedback into the loop. Thereby re-trying that query again.

Resolving pagination utilised another recursive loop wrapping the re-try section.
The GA Query node max records was set to 10,000. (there is no real reason in this instance that it needs to be set to anything other. ) 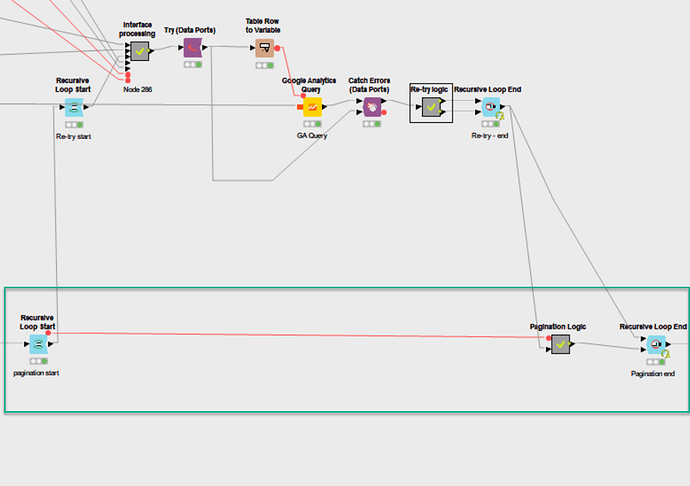 The idea here was to use the iteration number of the loop to figure out the starting index.
The data input takes its feed from the query node returned data. We do a row count and check if the number of rows is equal to 10K. This is fed to an ‘If’ node. If it is = 10K then the iteration number is fed to a math formula node that calculates the next start index. Else the bottom path is used which generates no rows. The output of the logic metanode is fed into the recursive input. So if there are no rows fed then there are no more pages to fetch.
If a row is fed, it re-runs the query with the new start index.

This is the outermost loop and is a simple table row to variable loop.
We take a start date and end date either from the component interface or from a flow variable into the component and feed this to a Create Date&time Range node with a 1 day setting. This generates a row per day with a date for each day. We then append this column to the other interface columns and feed them as flow variables to the Google Analytics Query node.

The end result is a repeated query for each day in the selected range, that avoids GA reporting using sampling. 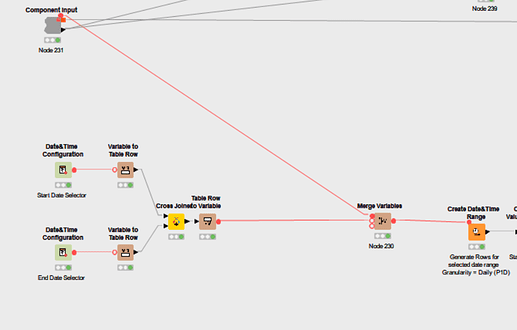 The final bit was making the interface available to the component config to allow users to generate their query.
The hard bit was the dimension and metric selection, mostly because i was barking up the wrong tree with the metadata api having missed the GET request format with no auth on the dev doc reference page.

However once we got that, it was a matter of parsing the returned JSON and feeding it to Column Filter configuration nodes.
Although the interface is not elegant as there is no capability to re-size or position the interface elements, i prefer this to the original interface as the selecting of dimension and metrics is a lot faster with the column search feature and selection of custom dimensions is a matter of selecting the Custom Dimension column then adding the indexes you want in the custom dimension numbers input. Less clicks, easier to edit = happy me (and hopefully you).

Unfortunately Knime as yet does not have the feature to run part of a component on initiation so fetching the metadata is not automatic. I had to move this to a separate component that you will need to drop into your workflow and connect it up the component. However there is no config or auth, so its plug and play…

For those where you may be using multiple instances of the component (multiple queries) i also uploaded a Date Selector. Basically a Calendar Interface you can use to feed the Start and end dates to the component using flow variables.

Anyhoot so there we are… Here’s the full Connection setup.

Hit me up if you have any feedback, improvements or encounter any bugs 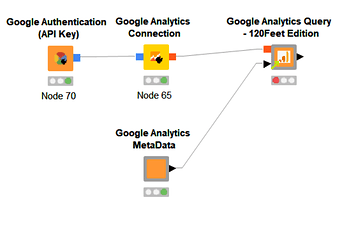 This is fantastic! Thank you for the detailed write-up and explanations.

If you have any feedback over how to improve please let us know. We are preparing for an update and so far have identified the following improvements:

Anything else, please hit us up.

Hey Gavin,
I really like the component that you’ve done.

I’ve recently pulled data using {Country, Date, Pages} as dimensions; {Pageviews, Users} as metrics.
When I was looking into it, I realised two things:

Any thoughts on why this might be happening?
Thanks

on your question, without seeing the exact report setup in GA, it’s hard to give you a definite view, the issues could be with GA report sampling, or not viewing full results in GA.

Happy to jump on a short call with you see if we can debug together. do you have slack? or feel free to contact me on gavin@120feet.com

Thanks Gavin.
I’ve sent you an email. Looking forward to connecting with you!

Pleased to inform you i have updated the component with the following improvements:

As always, any feedback or other improvements please let us know.

Thanks for the thorough explanation, very innovative. It would be great if you can also upload the workflow.

Hi @JulioCesar
If you download the component you can open it and explore its inner workings.
let me know if i misunderstood your request.