How to Build an Interactive Cell Selector 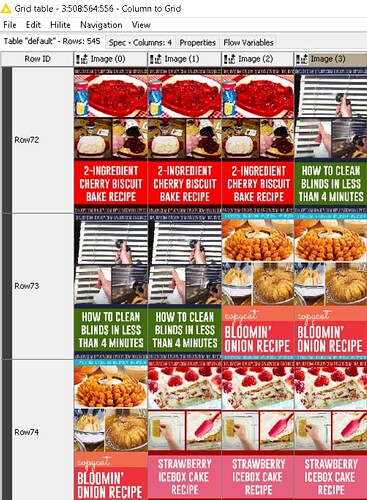 What I need is each column to have its own selector column appended next to it where I can interactively select the cells (images) that I want. The selected cells will then be filtered downstream.

I’m thinking of either 1 of these selection methods:

Kindly help with this. Thank you.

P.S. Would appreciate a workflow/idea that doesn’t involve looping since I’m working with a quite huge grid table.

Hi @badger101 , I can’t see how this would work in Knime. It does not usually do “cell filter”. It does row filter and column filter as in filtering in our out a whole row or a whole column.

There are a multiple roadblocks to do this. I’m not even sure if you could create such interactivity (cell selection). But let’s say you could do this, the cell selection. How do you apply the filtering after? And can someone pick more than 1 image in a row?

If we look at the Table View node, it offers interactive selection, but it’s done on a row-base:

It allows you to select rows, and it will generate a boolean column called “selected” to indicate which rows were selected. You can then filter the rows (entire row) based on that column.

How would you do a cell filter after you implement the cell selection?

The Generic JavaScript View that you referred to can’t be used in your case, at least I can’t see how to integrate this into your table as a column. I mean, if I understood you correctly, you would want this drop down for each row, correct? You want to have the user select image/images for each of the 545 rows??

Thank you @bruno29a I haven’t used that node before this. I’ll have a look.

And to your question on multiple cell selection, the answer is yes. Also good question on the filtering method afterwards, I can see how it relates to the former. I think I’ll just have to reformat the table post-selection to a double column? (one for image and another for the selection value)

On another note, if the drop down method won’t work for this case, I’ll see what other options I have, starting with the Table View Node you suggested.

Hi @badger101 , in the mean time, I put something together for you.

Not exactly how you imagined it, but it could be an option. That would work only on the back-end though.

The way to work with this would be to open the table that has the images:

And then execute the Loop. It will popup a window for each row, asking you to enter the column number you want to select:

And that’s the result after: 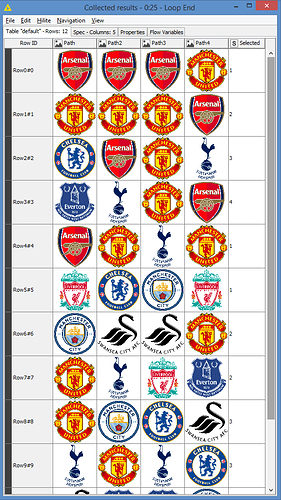 You could select more than 1 image, but entering multiple values, with a delimiter. For example: 1,2 would mean image 1 and image 2. It’s a free text after all - you would have to add validation to the input.

@bruno29a That’s impressive on first look. I am yet to download the workflow. If I am to use that idea, since it fulfils my purpose, I’ll have to find a workaround to get rid of looping. Either that, or I’ll have to somehow significantly reduce my image inputs with a pre-filtering mechanism, which I don’t at the moment have, given that these images don’t have metadata to be the basis of filtering, which is one of the reasons I’m relying on visual inspection for filtration in the first place.

On the other hand, I have looked at the Table View node, and unfortunately the interactive output appears in the form of a blob of text instead of images. But it’s a really interesting node since it can filter the row interactively with the tickbox option (which is in one of my lists), and it has the added value of a searchbox (although that won’t help me unless, again, I have the images’ metadata or some kind of labeling for filtration).

Hi @badger101 , indeed having to go through the loop is quite a pain for the user, not to mention that if he/she makes a mistake, he/she would have to start all over.

When I “discarded” the Generic Javascript View, I was thinking about using it to integrate a dropdown in each row of your table, which, as I said, I don’t think it’s possible. However, I have re-visited the idea, and what could work is if you re-create the whole table, including an extra column with an interactive field, via the Generic Javascript View node. But this will require excellent knowledge of Javascript in order to:
1- Generate the table dynamically
2- Add the interactive field (free text box or drop down) with dynamic identifier
3- Implement either an event listener (such as onChange()) or a form with a submit button
4- Translate the interactive input back to the table

Doable, but not as straight forward.

EDIT: Scratch my last comment. I see what you mean now. It looks like the Table View does not display the images correctly. It looks to be displaying their string representation (probably of their base64).

I figured out how to display them in the Table View. You have to render them as an image first using the Renderer to Image node, like this:

And that’s the interactive view I get now: 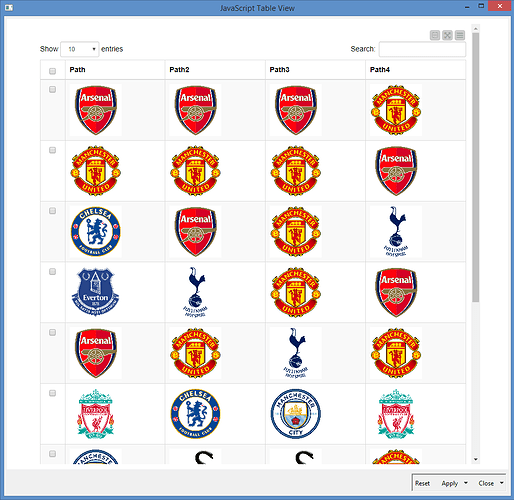 Here’s a snippet of the resultant table after applying it to my revised table: 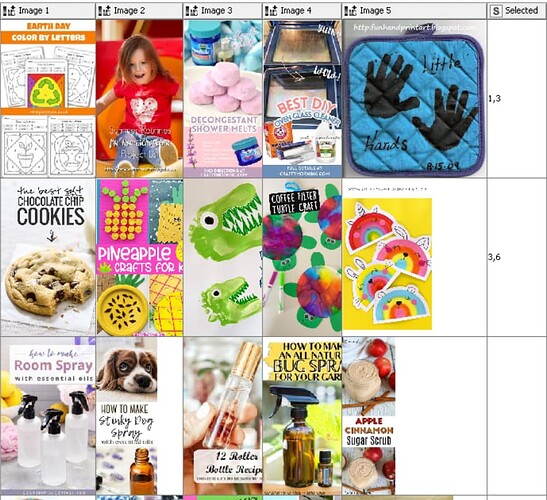 The good thing is it works exactly as you described. It also tolerates the case when the user doesn’t want to score a particular row, which will result in an empty value. That makes it user friendly.

The huge issue that comes with it, which, sadly renders it unusable even to my revised table, is the fact that the popup window during selection was not designed to also pop the row of images out. Unless the user has a strong visual memory like Dr. Strange, it’s impossible to implement the selection without referring to the images visually when it matters.

I guess I’ll have to revisit the Table View renderer idea now. (On another note, the Dropdown method won’t be an option anymore, considering the way you described it would mean that I have to be a coder which I’m not).

Update on the Renderer to Image Node: What a bummer that the node only deals with PNG/SVG and at the moment I can’t figure out how to convert my JPG images to PNG in KNIME.

For converting to PNG: does this help?

It’s a little cumbersome, but the following sequence works for me: [image]

I got this error shown on the console for the Tag Cloud solution:
Executing script failed after 10 attempts. The script is: ‘return document.getElementById(‘node-SINGLE’).contentWindow.knime_tag_cloud.getSVG();’

FYI my input table for the images comes from the Image Reader (Table) Node. It has JPG images rather than SVG.

I know it feels like failing on a KNIME challenge, but there are some great open source batch image conversion tools (online & desktop) that you can use pre-workflow.

I know people run ImageMagick command line batch conversions via KNIME to keep it within the workflow, but I never pulled it off. I only use it occasionally, so I just use a desktop batch conversion app pre-workflow to homogenize my image files a bit.

Also, Thanks for this thread! I had no idea this node could be used for recording user interaction. Very cool!

Hi @badger101 , I think I have something for you that could be useable.

You can use the Table Editor node!!!

The changes from my previous example with the Table View are these 2 nodes:

The Constant Value Column simply adds a new column, which I called “Selection”. The Table Editor allows you to choose which column is editable - in this case I choose only the “Selection”: 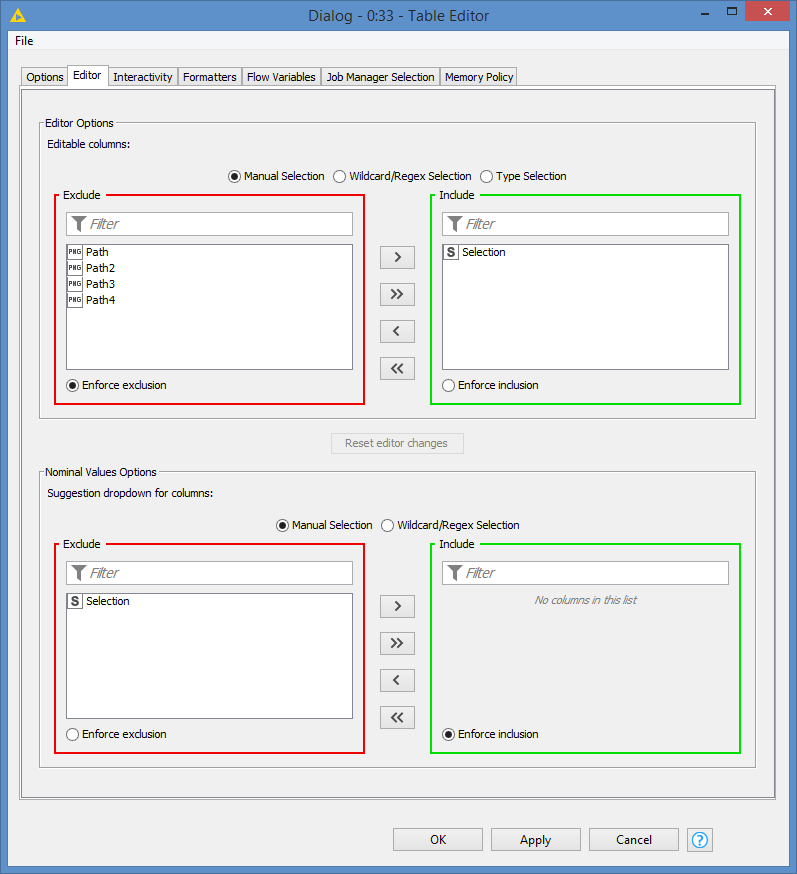 And now I can edit any of the rows in the column: 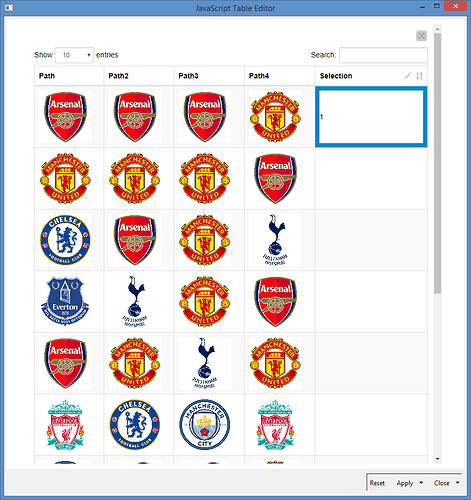 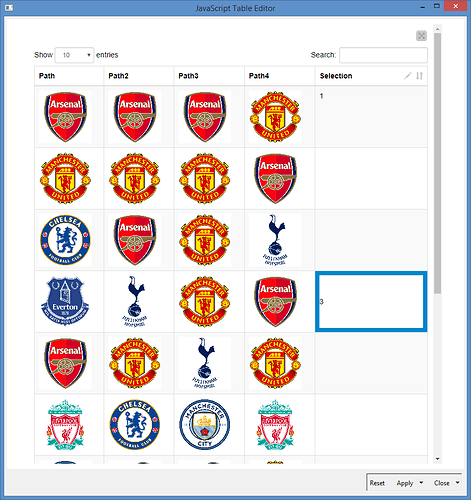 And that’s the result after: 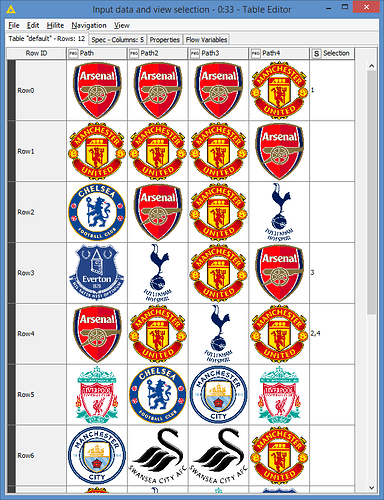 With regards to jpegs, you can convert to binary, then use the Binary Objects to PNGs node. Though the name of the node says “to PNGs”, it actually works for jpegs too. You can check what I did there:

Hi @sebversailles , I went back more carefully to what you wrote. The 2 nodes I suggested somehow work only with an image, not from binary objects, which I don’t understand why. I mean if they only take image as input, why do I need these nodes for if I already have the image? Anyways, for what you need, you can use the Binary Objects to PNGs node. I put a demo workflow quickly together for you. For my demo, I took some images and converted them to Base64, and then converted them back to imag…

Hi @bruno29a those are two really great news!!! I am almost finished with working with reconstructing my upstream parts which come before this interactive part, for efficiency purposes. I’ll definitely have a look at your latest reply once I’m done. Will update here later today.

@iCFO Thanks for the + feedback!!!

Thanks a lot @bruno29a for helping. Really appreciate it!

I have marked your last post as the solution since it works and it serves the purpose of what I was asking initially.

I’ve never tried the Table View Node until you brought it up. This interactive node is a big deal in my workflow, even though I’ve changed my original goal. All thanks to you!

I decided to utilize the node to show samples instead. This way I have reduced the need to use so many images which would otherwise render the node non-workable. I’m really happy with how it turned out! Here’s a glimpse of the screen. Now who’s hungry? 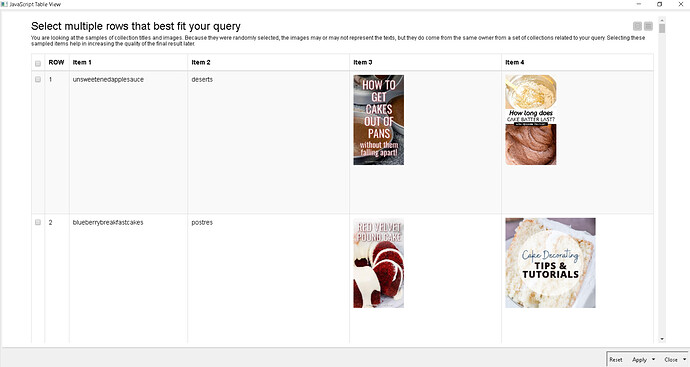