How to control a PDB read node with a flow variable

I’m not sure about the MOE PDB Read node, but there are several nodes for reading PDB files in the Vernalis community contribution:

If you want to download from RCSB PDB starting from a list of PDB Structure IDs, then there are these two (a source node and a manipulator, if your IDs are in a table column):

Alternatively, if your PDB files are stored on your filesystem, then the following two nodes will do the job. Again, there is a manipulator node, which accepts an incoming table with a column containing paths to the files:

And a source node, which allows you to add one or more files from the node dialog, or via a flow variable:

Hi Steve,
The Load Local PDB Files can do the job that I need. It did not work when I put this node between “Table Row to variable loop start” node and an “End Loop” node.
Is it possible to get rid of this loop and feed all the column that contains the paths for the PDB files in one go.

The PDB Loader node should be able to replace the whole loop.

Could you tell me the error message for the Load Local PDB Files node, as it should work, however?

I have to choose only one row from the list in the column of URL as you can see in the picture.
I would like to feed the node with all the files in one go. 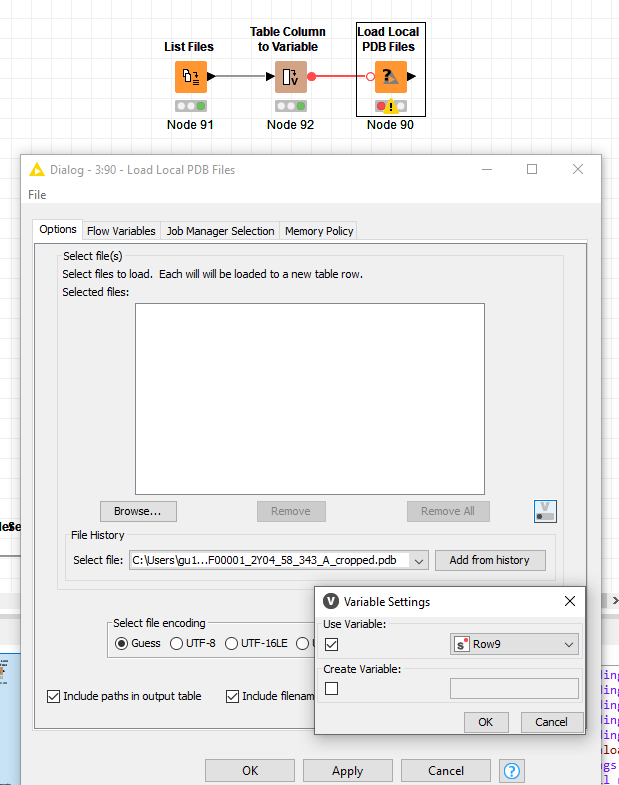 Add a Groupby node immediately after your List Files node, no grouping columns, and concatenate with ; as deliminator, or just use the ‘PDB Loadwr’ straight after list files

Hi @s.roughley and @Vernalis ,
I tried your method as the workflow shows

I see the correct list of paths in the flow variable that I specify in the “Load Local PDB Files” nodes.
I tried the different encoding but I get the same error:
ERROR Load Local PDB Files 3:98 Execute failed: Unable to download file after 5 tries
I put below a portion of my workflow. My goal is to call a number of files from a specific folder. Only the files that contain a specific string in their titles should be selected. To achieve that, I used String Manipulation to add a star * to the keyword that I am serching in files titles (ie: red* instead of red), then I convert this string to a variable, then I send it to GroupBy node and Table column to variable node then I obtain the error in the last node (Load local PDB files).

Is there any solution?
I am stuck.
Thanks,

Loads PDB files specified by a valid full file path or URL into a table. Files may be local or remote, as long as the URL is accessible. Only paths ending .pdb…

You can see how to do thisin the second part of the example workflow at:

This workflow demonstrates how to connect to the Protein Data Bank (PDB) using KNIME nodes. In the first section, the new PDB Connector nodes are used to build…

Thanks @Vernalis @s.roughley Steve,
Are you aware of any node or script that can convert the PDB to mol in Knime?
I would lieke to use the RDkit despritors for these proteins.
I tried Molecule Type Cast node but failed to convert PDB.
Thanks,

Does the MolConvertor node from the free Marvin nodes do it?

RDKit can take PDB as an input now, but it is not enabled in KNIME yet to my knowledge - @greglandrum - maybe that should be a feature request?

@s.roughley,
MolConvertor from Marvin did not work but the one from MOE did.

Makes sense to me.
There’s an old feature request open for this already that has somehow been forgotten:

The relevant C++ call is: RWMol.MolFromPDBBlock