How to find the intersection set of 2 sets

I have 2 collection columns both containing a list of words.
I want to find a list of words which exist in both of these 2 lists.
Example1:
column A: [good, bad, very, apple]
column B: [banana, ball, bad, chair, apple]
The column I want: [bad, apple]

Node 1 is your input data-set with the two columns, Node 2 is a simple join where you select Column A and Column B as the respective joining columns.

For Example1: this will list the value that exist in both data-sets in the first column of the Joiner output.
For Example2: this will create an empty table since there are no matching values.

Sorry Medzi, I think I have expressed my question weakly. Let me try again:
I have a table including 2 columns that their type is collection.
That means in each row of the table I have two lists of words and I want to find the intersection of these two lists in each row.
I have tried using Set Operator and Subset Matcher nodes but I couldn’t get my desired result.

Here is an image of the table: 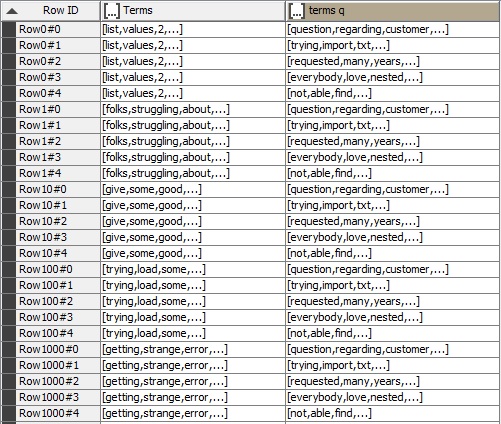 PS: I also tried to ungroup and match the terms one by one. But unfortunately the size of the table exceeds my system resources when the Ungroup node is at 4% of the progress.

Are you ungrouping the whole table at once? If yes, you can try to ungroup row by row:

If that doesn’t work, I think your only option is a java snippet:

This code can probably be written in a smarter way than above, but it seems to work as long as the terms in the lists are unique.

Are you ungrouping the whole table at once?

Ungrouping both columns at once doesn’t result in what I wanted and using 2 Ungroups one after another uses too much resources.

If that doesn’t work, I think your only option is a java snippet:

Thank you so much for the code. It seems it’s working.

@Aswin would you please explain to me what exactly happens if the lists have redundant terms?

If this is not what you want, you can replace the last line in the java code with

This will make all terms in the result unique.

Thank you so much for the explanation.