How to get notebook name in KNIME or in Jupyter notebook

I want to call Jupyter notebook in KNIME and get back the current notebook name.
The code in notebook as below:

then use magic cmd to show the name and path:
%whos

print the notebook_name and notebook_path, both of them are None.

print them again, now I can get the correct name and path. 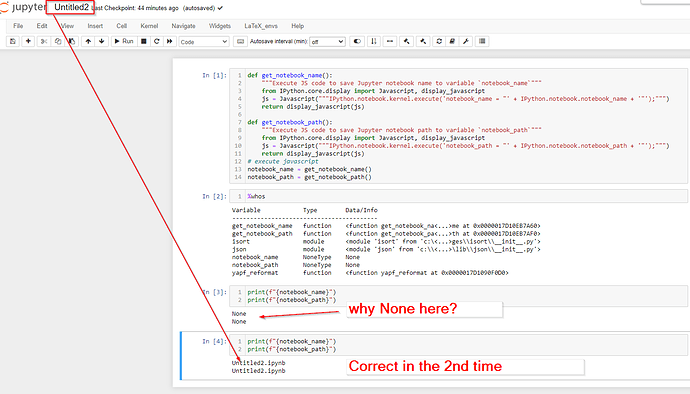 Appreciate any solution to get the notebook_name at the first print.

I was unable to reproduce the behavior you are seeing. Using the code you supplied, I did not see the variables notebook_name or notebook_path created at all. Suspecting I made a mistake, I experimented with variations but had no luck with creating those variables (visible inside my Python kernel). I inserted a console.log('howdy') into the function and verified that it was indeed getting executed, but still what happens inside the IPython.notebook.kernel.execute(...) remained a bit of a mystery.

This made me curious so I experimented with creating the following function, derived from one of yours:

Executing this, I do see notebookName appear as a variable in my Python kernel and it is populated with the correct name of my Notebook from the start. (No initial value of None as you experienced.)

This is as far as I got:

I am not sure that the above really helps you but I hope that my example function might provide a more stable way of accessing this information about the notebook, especially across different versions of Jupyter.

Curiously, I did finally get a variation of your original function to finally populate a variable, accessible in the Python kernel. But I still have not seen the behavior you originally described where an initial value of None is seen and later a str.