I am new to KNIME Development, Please help me

@gab1one, thank you for your sincere reply.

I have tried to run and try for AP target, it is the simillar problem

Below is the selection of KNIME.AP and then the time when I run KNIME Analytics Platform launch. 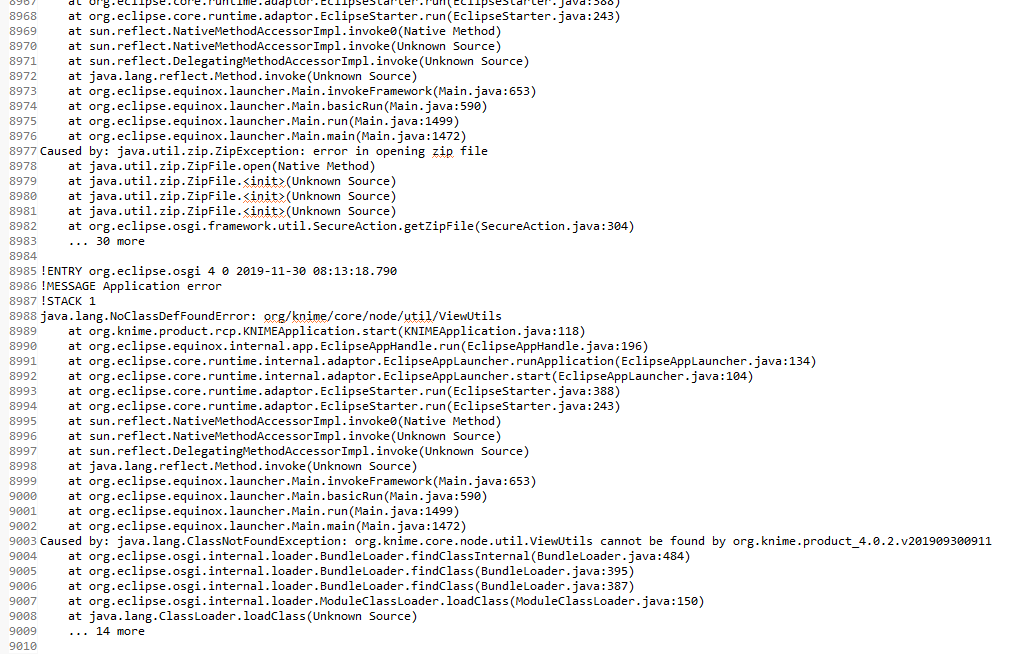 And I also added API BASE line 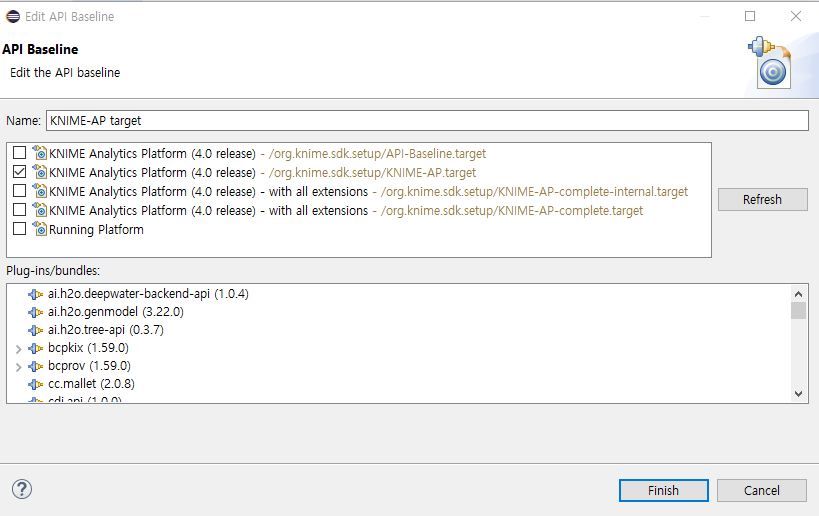 What do I miss for setup for KNIME Analytics Platform?

Hmm… sorry for the confusion in my post, let me rephrase more clearly:

I appreciate your help and concern.

I reached on the 5th step.

The reason is that I would like to learn how to work KNIME Analytics Platform and also interested in GUI based data science.

I have done in 4 step which import org.knime.core.

I got error when I launch KNIME after importing org.knime.core.

Below image shows before launching KNIME and errors. 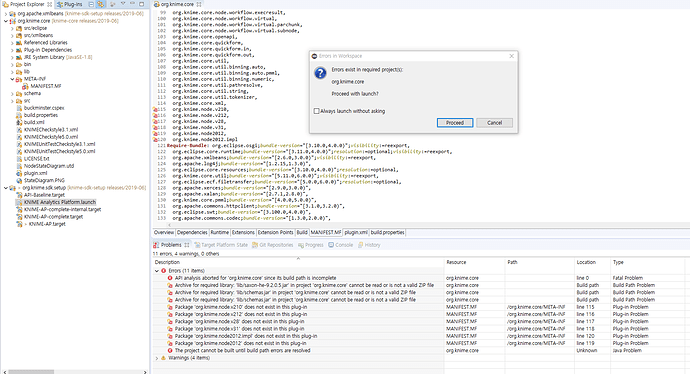 Ok - but, step 3 was ok? (You could launch the app with only the sdk-setup project?)

In that case, do you really need to import org.knime.core? Why?

You can make a new Eclipse plugin at this point which would be a new KNIME node if you so wish. You could download a wizard for your Eclipse install following the instructions here and it will create most of the project for you.

(p.s. the sun has long set here on the US West coast and i’m offline soon - Deutschland will be on soon, maybe… if not - i’ll check in, in roughly 10 hours.) 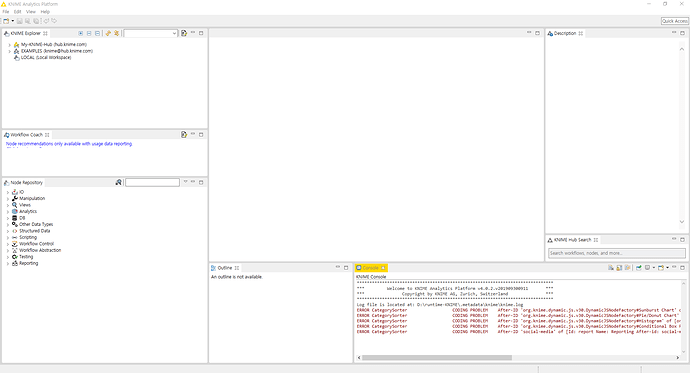 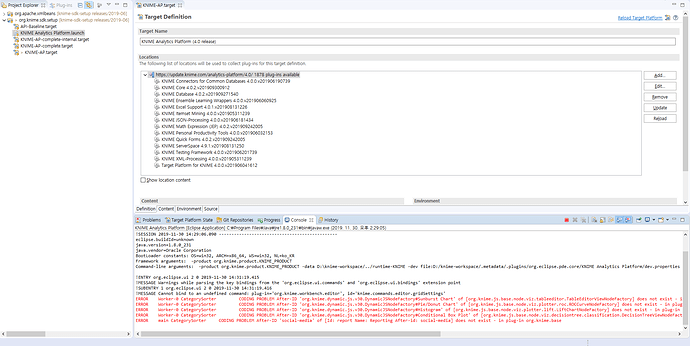 but I thought there are no for them due to not import projects yet. So I didn’t mentioned previous thread.

do you really need to import org.knime.core => I think it would be helpful to understand KNIME workflow and more interested in platform developement than extention development and also converting import or export workflow and try to contribute KNIME Analytic if my coding skill will be leveled up.

Um, anyway, since one or more KNIME project are imported, I can not run anymore KNIME:disappointed_relieved:

You can reference (for example) org.knime.core as a “plugin dependency” in your plugin, but not import the source code project to your Eclipse.

I agree it’s nice to have the source code around to reference, but if you import the dependency and then MOD1-click on a class name, if it can’t find the source, Eclipse will ask you to locate it, at which point you can tell eclipse where the actual java files are.

My suggestion is to import the sdk-setup project, install the Node Wizard, and then make a new node project through the wizard. That will (should) create a plugin with the right dependencies for a minimal KNIME node.

if you import the dependency and then MOD1-click on a class name, if it can’t find the source, Eclipse will ask you to locate it, at which point you can tell eclipse where the actual java files are.

I can’t imagine what the real works are from your saying and also how to do actually.

My suggestion is to import the sdk-setup project, install the Node Wizard, and then make a new node project through the wizard. That will (should) create a plugin with the right dependencies for a minimal KNIME node.

I agree that I also need to know node making, but I am more interested in platform development than node extension development from https://www.knime.com/developer-guide . So I post this for asking how to do and find out what I want.

So currently I can not run and see flows of KNIME with KNIME source codes now
https://forum.knime.com/t/i-am-new-to-knime-development-please-help-me/19765/7

When you say “platform development”, what do you mean?

Since this is based on Eclipse, a usual way to make a new addition to the desktop platform would be as an Eclipse plugin (and so, again, cite org.knime.core (or whatever) as a dependency - not importing the source code as a project in your IDE.)

I’m in Korea and I waked up.

I tried to find what I faced simillar.

Overall, I would like to know how to debug and inject like System.out.println(“here”); where code flow and local build try and understand first.

And I got stuck here in https://github.com/knime/knime-sdk-setup

I note the screenshot of the build failure of knime-core is complaining about library jars being corrupt. Did you install Git LFS? If you look on the filesystem, do those jar files exist? Are they of a non-trivial byte size? Can you jar tvf them successfully?

Also i noticed in that same screenshot that the KNIME-AP.target has been modified (it has a > prefixing it in the project explorer.) Why is it modified? Is this the target that you’re basing you platform on? If so, can you discard any changes you’ve made, reload it, and re-set it as the target platform.

Why is it modified? Is this the target that you’re basing you platform on? If so, can you discard any changes you’ve made, reload it, and re-set it as the target platform.

I tried to click “update” and “reload” it changes.

Did you install Git LFS?

About this, I skipped. because I use Eclipse git.

And I did not edit jar files and there are already in lib folder. 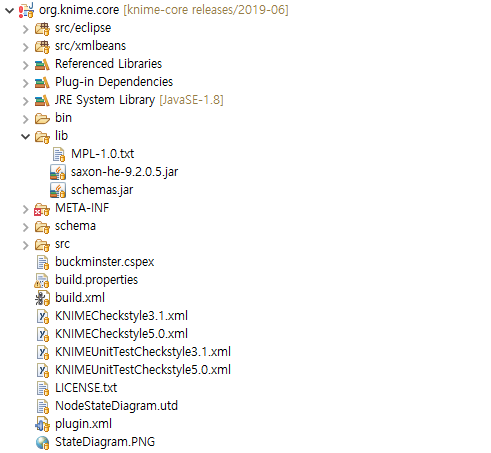 Overall, I just imported and it shows these errors not using jar command.

and also I checked as you mentioned 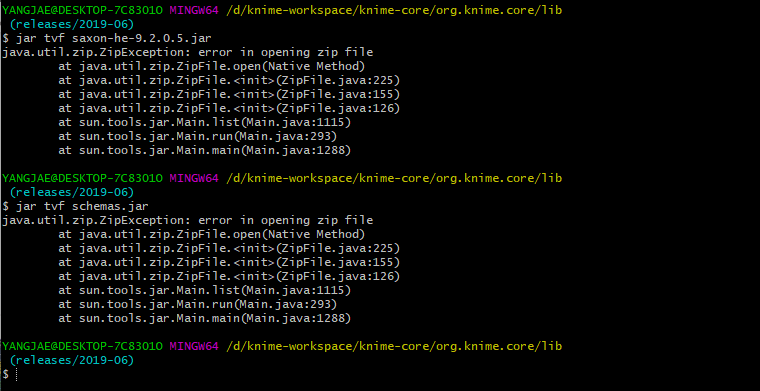 Apparently Eclipse Git sucks as it is not performing LFS. 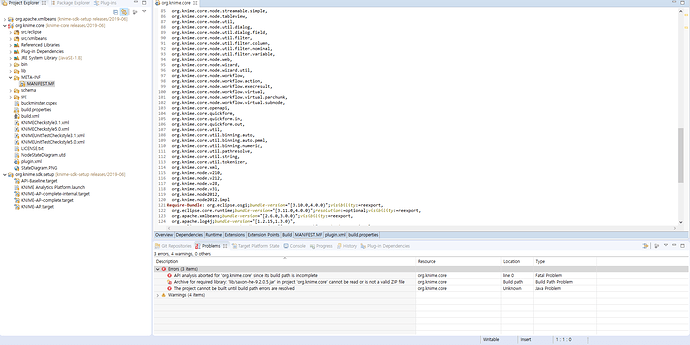 error log a little is different with before
error log.txt (273.4 KB)

That screen shot still shows one of your jars being invalid - you’re still failing to get all of the artifacts out of the git repository.

I tried to do if it is a little problem solve by installing git lfs window just install, remove and install lfs again, that is the root. I think just problem doesn’t show at that time…

anyway I only have this problem?.. 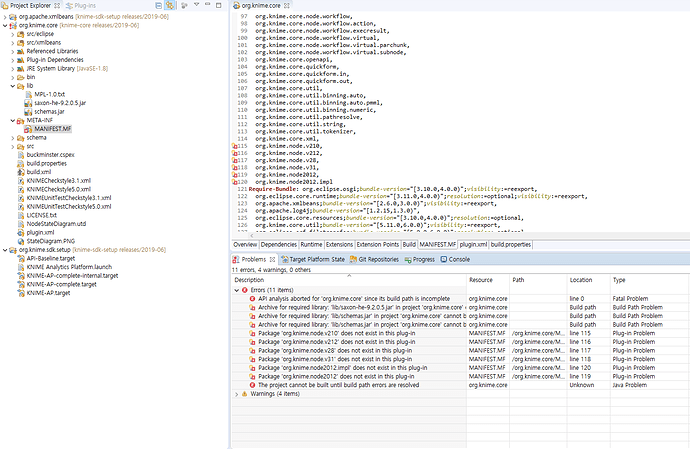 @quaeler Do you also have the same problem from initial start?

This screenshot shows the same problem as before (none of the jars in the lib/ folder are valid) - which makes it seem like your LFS has not worked / your git clone did not get the jars, only the the referential pointer versions of them.

If you use the jar tvf again, they will likely throw the same exceptions - also if you look at their file size, they should be in the 10s or 100s of KB, but will probably be a 100 bytes or so if not-LFS’d correctly.

I did not have the same problems from the start, but i know you’re not the only person to have problems; KNIME development isn’t for the faint of heart!

I finally can run KNIME. 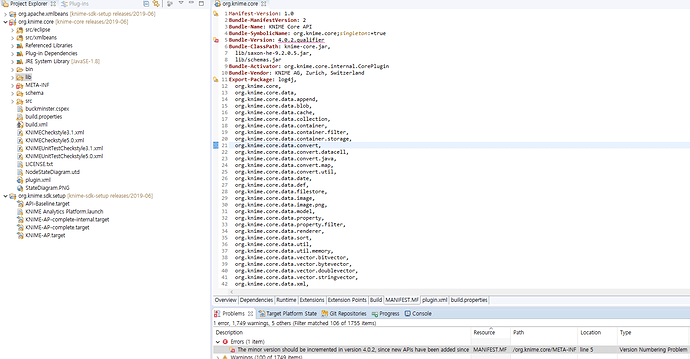 only I have one problem. even thought it has one problem, I can run KNIME.

My problem is just using Eclipse git to import.

I changed git method to import from https://github.com/knime/knime-core

And also adopt it for file name long problem from https://stackoverflow.com/questions/22575662/filename-too-long-in-git-for-windows

Anyway thanks to deal with this problem

I know it’s in vogue to have an IDE do absolutely everything for you - but consider ditching Eclipse Git and using something like (if you don’t want command line) Sourcetree.